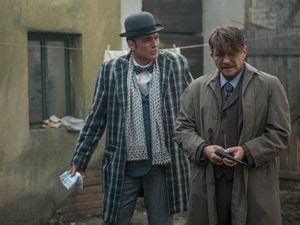 Senke nad Balkanom is a TV series starring Andrija Kuzmanovic, Marija Bergam, and Dragan Bjelogrlic. A historical fiction drama and thriller set in the turbulent period of the late 1920s in the Balkans as a place where high…

Tane notes that the victim and Maya were similarly dressed at the costume party. While interrogating Maya and Vojin, Tane soon concludes that Maya is Vojin’s mistress.

The final clash is close. Tane and Stanko ask Dimitrijevic to guarantee that Kaludera will be brought to court if they arrest him.

Tane, barely alive, finds Niski with her people and leads him to Prsa. Tane learns from Niski that Krojac is a war veteran and that in the past he has been in contact with the famous Tankosic and his “black arm boys”.

A raid in Macedonia comes as retribution for Damjan’s abduction. Stanko admits to Tane that he killed Stavre.

Tane finds Stanko in a bar. Tane tells him to go to Toponica and talk to Prince Djordje , the author of the painting “The Black Sun”, which hangs on a wall in Avakumovic’s house.

Tane and Stanko examine the evidence against Zivojin, who could have been involved in Avram’s death.

At the photo shop, Tane and Stanko discover that Neven was killed for the pictures of the costume party. Meanwhile, Taneta is still suspicious of Maya, so he takes her to Glavnica and examines her purse.

Maya was initially shocked that Avram was a butcher, but when he recalls some details, everything begins to get a new meaning.