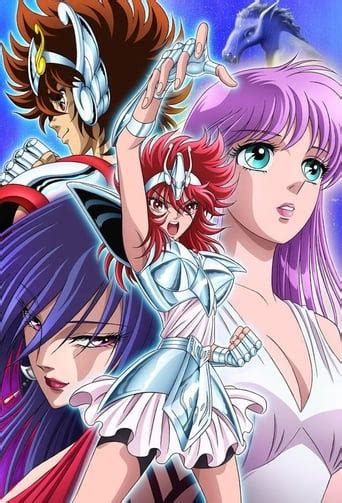 Seinto Seiya is a TV series starring Hideyuki Tanaka, Tôru Furuya, and Ryô Horikawa. A group a young warriors known as ‘Saints’, each in possession of a ‘cloth’ guarded by a different constellation, must protect the reincarnation of…

Hyoga comes to, tells Ikki he was weak because of his emotions and tells him to continue. Hyoga must control his emotions and be strong during battle, like Camus taught him. He then goes to the Arctic Ocean Mammoth Pillar. Ikki heads to Poseidon’s Temple, hoping his friends will remain strong and focus on saving Athena. Hyoga arrives at the pillar and senses a familiar cold air. A Mariner General greets him, and he is revealed to be Issac, Hyoga’s training partner when he trained with the Crystal Saint. Now the Mariner General Kraken Issac, he attacks Hyoga, leaving …

With his dying breath, Baian tells Seiya he will never be able to destroy the pillar. Seiya’s Comet and Meteor of Pegasus are useless and fail to even make a scratch. Meanwhile, Kiki is saved by Ophiucius Shaina who brought the Libra Gold Cloth with her, under Roshi’s orders. Seiya plans on destroying the pillar using his own body, but Kiki stops him and brings the Gold Cloth to him. Meanwhile, Shaina stayed behind to fight Thetis. The Golden Shield flies to Seiya’s hands, and he uses it to finally destroy the North Pacific Mammoth Pillar with a mighty throw. As the …

With her evil power, Hilda tries to kill Seiya. Shiryu, Hyoga, Shun and Ikki struggle to help their friend. Saori’s Cosmos won’t last much longer. Seiya fights back, but can’t kill Hilda, otherwise Asgard and the world would be lost. Hilda attacks and Seiya falls down a cliff. As Seiya is about to give up, Saga’s spirit calls out to him, reminding him of their battle and how he awakened the Seventh Sense to defeat him and save Athena. Saga also reminds Seiya that he will win as long as he has hope, entrusting him with Athena. Seiya climbs back up and heads for Odin’s …

Seiya finally faces the Holy Father thanks to the sacrifice of Shaina. However, Seiya must confront a force unlike any he has ever encountered. Pegasus vs The Lord of The Saints…

6. Atena yo! Kedakaki towa no inori

Seiya is victorious and the Nibelung Ring is finally destroyed. The Odin Robe removes itself from Seiya’s body, completing its mission. However, Hilda is down, and bleeding. Seiya fears he has killed her, and Saori is down as well, exhausted from using all of her Cosmo. Asgard begins to crumble and the flood seems imminent. As the flood continues, the corpses of the God Warriors (including Bud, who succumbed to his wounds) are shown. Seiya’s friends regain consciousness and so does Hilda. She then takes the Balmung sword and prays for everything to be returned to …

Seiya was attacked twice by Baian’s God Breath, and is still able to stand. Baian uses his most powerful attack, Rising Billows, which sends Seiya all the way to the surface of the Pacific Ocean. Shiryu and Kiki arrive in Asgard and dive into the whirlpool. Seiya was able to return to the battlefield, determined to win. As he attacks with his Meteors again, Seiya is able to break through Baian’s defensive wall. Shun arrives at the South Pacific Mammoth Pillar and sees a mysterious woman, but she transforms into a demon. It attacks, but Shun is able to defend himself …

Both warriors use their techniques, but Seiya is overpowered and falls to the ground, yet he was able to land several hits on Siegfried’s heart. Saori, Shiryu and his friends deposit their Cosmo into Seiya, making Siegfried doubt is Hilda is right, or if Athena is true justice. Hilda suddenly arrives and attempts to finish off Seiya, but Siegfried stops her to confirm his doubts. They attack again, with Seiya’s Meteors pushing back Siegfried’s Dragon Bravest Blizzard and attacking his heart. Seiya has finally won and goes to retrieve the Sapphire. But a man, playing a…

Seiya and Shun recover and defeat the Mariners who have arrived. Meanwhile, Poseidon takes Saori to a place where she will give humanity a chance to live, by sacrificing her life. He explains that the underwater Sanctuary has Mammoth Pillars that hold up the seven seas: the North Pacific, South Pacific, North Atlantic, South Atlantic, Indian, Arctic, and Antarctic Oceans. The Mammoth Pillar holding up the sea in its entirety is the Main breadwinner. If it is destroyed, the underwater Sanctuary will be no more. The water that is raining down on the Earth, now falls …

Kiki tries to stop Freya from going to Saori’s side, who is getting weaker by the minute. She realizes that even though Siegfried is the last God Warrior, Siegfried is reincarnated from a warrior with the same name, who became immortal after defeating a dragon and bathing in its blood. Shun and Ikki take Hyoga with them further into the palace. Seiya reaches the Odin statue, but Dubhe Siegfried stands in his way, not willing to show any mercy. Siegfried easily dodges Seiya’s attacks and defeats him with his Odin Sword technique. Hyoga, Shun and Ikki arrive while Kiki …

Ikki arrives after his battle with Mime, determined not to abandon his brother. Bud, angered at the fraternal bond between Shun and Ikki, begins to attack, saying that compassion is useless. Ikki miraculously blocks Bud’s light speed attack before they clash, whereupon Bud’s helmet is knocked off, and his face is exactly like Syd’s. Bud reveals that Syd is his younger twin brother. Ikki confronts him about not helping his brother, and Bud responds that if Syd dies, he will become the true God Warrior of Zeta, and no longer be a shadow. Ikki attacks, but Bud easily …

The Worst Action Shows from 2019