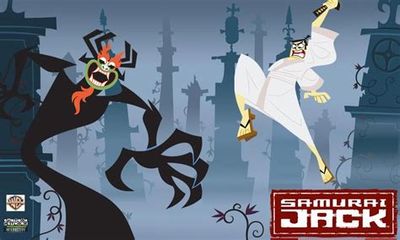 A samurai warrior fights against the evil entity that took him away from his home world.

Samurai Jack partners with a deadly assassin in order to escape a gargantuan creature that has swallowed them whole.

8. Episode XI – Jack and the Scotsman

Samurai Jack is crossing a seemingly endless rope bridge when he meets another wanted man coming from the other side: the Scotsman. After fighting each other to a stalemate, they are forced to team-up when bounty hunters arrive on the scene and shackle Jack and the Scotsman to each other.

7. Episode XXV – Jack and the Spartans

Samurai Jack follows a little girl to return the doll she lost in the woods. She leads him into a haunted house filled with memories of the previous inhabitants.

5. Episode XLIV – The Princess and the Bounty Hunters

Bounty Hunters Jo Junga the Aborigional, I & Am the infamous twins, The Gentleman & Boris the Russian have all tracked down Samurai Jack up North. Princess Mira of the Andaluvians convinces them to join forces and attack the Samurai together.

After Jack left with the mysterious figure Ashi goes on a quest to find him.

A deadly Ninja warrior has honed his skills to fight Samurai Jack. But just as he is about to ambush him, Jack is called away to rescue a village from attacking crab monsters.

Jack learns about a wishing well of King Osric on top of a tower protected by three unbeatable archers and vows to make his way past them.

Out of weapons and pursued relentlessly by the masterful seven Daughters of Aku, Jack faces what may be his final confrontation.

Best Episodes Of The Punisher