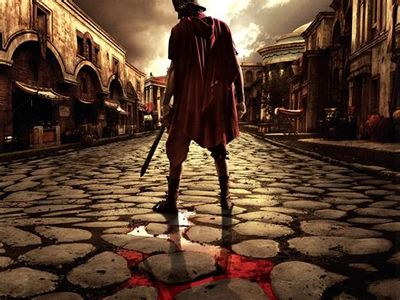 The defeated Cato and Scipio fall back on the African city of Utica after the Battle of Thapsus where they decide to end it all. Caesar, after two years of fighting in Greece and Egypt, returns to Rome and receives a hero’s welcome. Meanwhile, Servilia’s cold rage against the Julii clan makes Brutus’s submission to Caesar even more painful. Octavian returns home from military school and Caesar, impressed with his nephew’s incisive political acumen, appoints him a pontiff despite his youth. Having opened and operated a profitable butcher shop, Niobe and Lyde get the …

Octavian takes a new bride, Livia, and then introduces her to his family in a startling way… by having her witness the punishment he metes out to Atia and Octavia, for secretly defying the social constraints established through the facade of Octavia’s “marriage” to Mark Antony. The vengeful Gaia carries out her plan to poison Eirene, which produces most dire consequences for Pullo, and no one else is the wiser. Meanwhile, Octavian, Antony, Maecenas, and their associates barely maintain their relationships of congenial contempt and hypocrisy, as everyone tries to …

As they try to reach Caesar in Greece, the shipwrecked Vorenus and Pullo confront an unexpected dilemma. Back in Rome, Atia again sends Octavia to beg protection from Servilia, who complies readily to encourage her growing friendship with Octavia. As they prepare their counterattack against Caesar, Pompey’s Republicans begin to squabble over both the anticipated spoils and the method of finishing Caesar off. Niobe’s sister Lyde comes back to see her and comforts her over Vorenus’s disappearance. Badly outnumbered, Caesar and Antony make their stand at Pharsalus. On …

7. Heroes of the Republic

Vorenus and Pullo return to the Collegium in Rome with Vorenus’ family, but some of the “changes” that Pullo had warned him about regarding his two daughters Vorena both the Elder and Younger, as well as his wife’s son, begin to manifest themselves into hostility and resentment. But Vorenus is completely oblivious to this, and is too blissfully happy to return to the role of ‘father’. Meanwhile, Octavian finally returns and manages to negotiate the Senate Consul’s seat from a scheming Cicero, but in spite of his promise to ‘faithfully follow’ the older man’s counsel, …

The price of Caesar’s mercy: Cicero nominates Caesar to an unprecedented ten-year dictatorship and Brutus speaks in support of the motion. With martial authority and Niobe at his side, Vorenus campaigns for magistrate under Posca’s advice, but is shocked to learn from Posca that Caesar has already fixed the election in Vorenus’s favor. Meanwhile, Atia continues her humiliation of Servilia while denying any involvement in her assault. But Atia becomes troubled by the silent depression of Octavia after Octavian compels her to return home from the cloister where she had …

Cicero is finally undone by his duplicity in the form of Titus Pullo, acting upon Octavian’s request to assassinate all supporters of Brutus in Rome. Pullo and Vorenus enjoy a happy if counterfeit outing with their families in the countryside to hide their assassin mission. Vorena the Elder’s dangerous dalliance with one of Mimeo’s men continues, and the torrid affair between Octavia and Agrippa escalates. Atia’s casual cruelty to ask for the assassination of people she doesn’t like results in complete disaster for Octavia’s friend Jocasta. Elsewhere, the headstrong …

In the wake of Caesar’s death, Mark Antony considers a move north, while Vorenus issues a curse he soon regrets.

Vorenus’ defense of Caesar lands him in an unexpected position of power within Rome. Meanwhile, Servilia hurls the final obstacle in her ambitious and complex revenge plan against Atia.

Seven years have passed since Antony’s departure from Rome, and the former commander, dissipated and debauched – held in thrall by the charms and sexual prowess of his new bride, Cleopatra, withholds precious shipments of grain from Rome, where people die in the streets from hunger. Unable to incite a war with Antony and Egypt without committing political suicide, Octavian sends Atia and Octavia to Alexandria to mediate and reason with Antony; a strategy which proves predictably unsuccessful. However, former Roman senator Posca and his wife, Jocasta, flee Alexandria …

1. De Patre Vostro (About Your Father)

With the defeat of the Egyptian fleet at Actium, Mark Antony and Cleopatra retreat to their palace and await their fate. Believing that Cleopatra has taken her life, Mark Antony decides follow her into the afterlife. She has other plans however and is quite prepared to negotiate with Octavian if there is any possibility her life and those of her children will be spared. Cleopatra asks Vorenus to take her son Caesarian to safety and Octavian sends Pullo after them. The old friends are soon together again but are waylaid by bandits. With Vorenus severely wounded, Pullo …