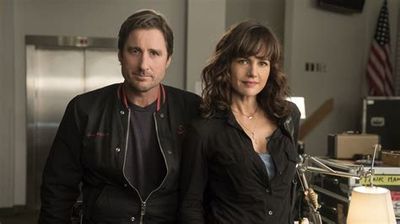 Janine accepts Reg’s invitation to Denver hometown show 2 with unexpected consequences. Meanwhile Shelli and Bill face the repercussions of show 1, while Wes and Winston have a guitar lesson with a rock legend.

Notorious music blogger Bryce Newman sets his sights on the band, penning a post that eviscerates them as dull and irrelevant. When Reg invites him to the band’s next show to smooth things over, the crew takes matters into their own hands.

An array of crises land on Bill after the band has a disastrous show .

A memorial for a rock legend at the LA Forum has a star-studded lineup.

6. Life Is a Carnival

The management and loyal crew of a touring arena rock band work tirelessly behind the scenes to make the show happen each night; the sudden arrival of a slick British financial adviser Reg Whitehead shakes up the group.

4. The All Night Bus Ride

Phil enthralls the crew about his start with Lynyrd Skynyd, Shelli leaves the bus for unexpected family tragedy, and Reg has an epiphany that may effect them all.

There’s a super-moon and a lot of family and old friends are coming to the hometown Denver show, including Janine. Shelli gets extra help backstage. Reg is still seeking material for the boxed set and finds a couple of great sources.

2. The City Whose Name Must Not Be Spoken

Regg unexpectedly boards the bus on the morning of the crew’s day off. Unknowingly he utters a word that drastically changes the day for everyone. Meanwhile a band member turns up missing.

The tour arrives at their next gig, for Funco, makers of an eraser. As they gather outside the hotel where the band is playing. Puna comes out of the bus with a dire dream prediction that “whatever is going to happen will happen tonight”. Things slowly teeter on the brink of great to horrible. What will happen?

The Best TV Thrillers ever