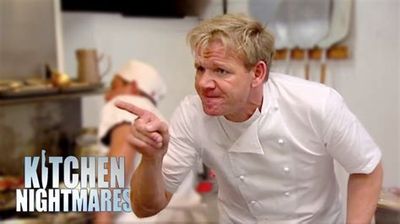 Gordon visits is The Fish and Anchor, pub restaurant near Lampeter in rural West Wales, owned and run by ex-boxer Mike and his wife Caron. Mike, a self-taught cook, is a one-man pressure cooker in the kitchen as he struggles to accommodate a vast menu, while Caron’s unique style of front-of-house management includes abusing the customers, and her husband, in equal measure. Every night they go twelve rounds with the local clientele who are fast deserting them to the tune of a £1,000 per week loss.

The venue for tonight’s first programme is La Lanterna in Letchworth, Hertfordshire. Twenty-eight-year-old owner and head chef Alex offers modern Italian cuisine, a taste of Little Italy in England’s first garden city, and the restaurant is run by his best mate maitre d’ Gavin, helped by his ex-air hostess girlfriend Emily. But Alex has no customers, cookers that don’t work and an expensive menu that’s about as authentically Italian as a spag bol. He re-mortgaged his house to buy the business, it’s losing Â£1,000 a week, he hasn’t slept for months but still runs round…

In tonight’s program Gordon Ramsay travels to the seaside to help ailing hotel and restaurant, THE SANDGATE. This is LOIS and PETER’s first venture into the catering industry – the happily married couple used to enjoy eating in restaurants, so thought it might be fun to own one. 18months later their dream has turned into a nightmare and they’re loosing Â£4,000 a month. In the kitchen their head chef, STUART is on the brink of a nervous breakdown. He’s forced to cook for 4 restaurants including a fine dining upstairs, and a Japanese restaurant in the basement, but it’s…

Tonight’s program sees Gordon Ramsay in Oscars in Nantwich. On the surface this place seems idyllic, an Irish family run restaurant in the heart of beautiful countryside. Owner MAURA runs the front of house and her son LENIN is the Head chef, but it’s not ‘happy families’. With her life savings on the line Maura is in big trouble. She constantly bickers with her son whilst the customers are forced to wait hours for their fluorescent crab stick paellas, and stodgy carbonaras from Oscars ‘bit of everything’ menu. The place is losing Â£2000 per week, but that isn’t the …

The venue for tonight’s program is Clubway 41, despite being voted Blackpool Tourist Board Restaurant of the year, the place is dire straits. It is the prime example of HOW NOT TO RUN A RESTAURANT. Owner DAVE is the flakey self-appointed head chef, who hasn’t been in a kitchen for 30 years and can’t cook. His partner DAWN invents bizarre dishes for the menu, ranging from ‘tomato and cointreau soup’ to ‘pork with brie, nectarine and whiskey sauce’. Gordon faces a hellish week, Clubway 41 is breaking every rule in book, can he bring Dave, Dawn and their food back to …

Nick and Richard are self-confessed restaurant virgins. They’ve both had successful careers in the brewery business so when they bought Moore Place last summer they thought their dream had come true. What they hadn’t fathomed was just how difficult it would be to fill the 90-seater oak-panelled restaurant or find a chef who could cook decent food.

Tim Gray is 21. He’s the Head Chef at Bonapartes in Silsden, Keighley, Bradford, West Yorkshire and he specialises in ‘fine dining’. He has ambitions to be a TV chef and one day hopes to open restaurants in London, Paris and New York. Unfortunately, as Gordon Ramsay discovers, Tim can’t even cook an omelette and when he attempts to make dinner for his parents at home he manages to set the cooker alight. A true kitchen nightmare if ever you saw one.

The Dovecote is a bistro in the heart of rural Devon run by a family at breaking point. The restaurant is on its last legs – they’ve run out of customers, money and hope. Enter Gordon, who on his first visit to the bistro is confronted with hideous wallpaper, vacuum packed lamb and a pig-headed head chef and owner who can’t face up to his mistakes. Gordon has a torrid time putting them on the road to recovery, but come the autumn, they are sticking to his rules and business is looking brighter.

Gordon visits the Curry Lounge in Nottingham, the city with more restaurants per square mile than any other in Britain. This 110-seater Indian restaurant has been run since January by ex-sales director Raz who’s new to the business – and it shows. Despite a £500,000 refurbishment, and décor like a Bollywood set, the honeymoon period’s well and truly over. His once-healthy trade is evaporating and, at his current rate of loss, it’s uncertain he’ll make it past Christmas.

The venue for tonight’s third programme is Momma Cherri’s Soul Food Shack, an intimate forty-seater a stone’s throw from Brighton’s sea front. Big soul momma, owner CHARITA JONES, produces a menu of irresistibly unique classics from the Deep South. The food’s hard to fault but the punters are nowhere to be seen, Head Chef Brian and a rag-tag collection of part-timers are taking the mickey – and despite working a seven-day week Charita’s got an empty restaurant and a Â£65,000 debt. If ever there was a case of too many cooks, this is it. Charita’s a natural, but she’s …

The Worst Adventure TV Series from 2000