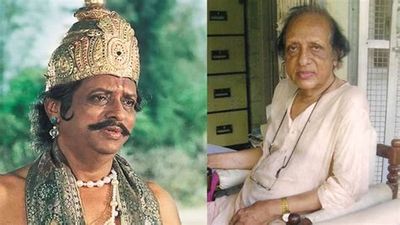 Ravan attacks Shri Ram with all his pent up fury. Enraged Bibhishan, Sugriv and others attack Ravan, who becomes unconscious. His charioteer drives away from the battlefield.

Hanuman kills Kalnemi, reaches Dronagiri, lifts the whole peak and flies back. Hit by Bharat’s arrow, he falls down in Ayodhya. Sushen Vaidya saves Lakshman with Sanjeevani her.

Kaikayee demands that King Dasharath fulfill a promise he made a long time ago in the form of two boons. Unable to change her mind, Dasharath is forced to appoint Bharath as the future king while Ram exiled to the forest.

Shri Ram worships Lord Shiva and seeks his blessings. monkeys, under the supervision of Nal and Neel, start working with gusto.

Celebrations mark the proclamation of Ram as heir to the throne but Manthra provokes Kaikayee into sabotaging the coronation.

Passing through a desert, fainting with hunger and thirst, Angad and others notice a cave from which birds come out with their wings wet. They conclude that there is water inside the cave. They enter the dark cave and reach a lovely grove with water and trees laden with fruits. They find Tapasvani Swamprabha, who tells them to have their fill as they have come on a noble mission. She even transports them to the sea-side by her tapes. There they meet Sampati, the older brother of Jatayu. Sampati, though old and weak, can see things very far off and tells them that Sita…

King Dasharath denounces Kaikayi as his wife and falls into a deep depression at the loss of Ram. The Grief stricken people of Ayodhya try to stop Ram from going to the forest, but ultimately fail.

2. Ravan comes to the battlefield

Ravan fights with Sugriv and Lakshaman. Shri Ram confronts Ravan. Ravan returns to the palace, a broken man. Malayavan then suggest that they should awake Kumbhakarna, whose valor is proverbial.

Vibhishana told Rama that Ravana’s weakest point was in his navel. Rama with his powerful arrow shot Ravana in the navel, then Ram used Brahmastra and killed him.

Best Episodes Of The Mandalorian