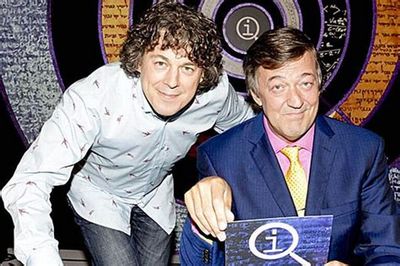 Sandi Toksvig invites Phill Jupitus, Sara Pascoe, Mark Watson and Alan Davies to join her in the QI restaurant for this edition of the quite interesting programme.

Comedy quiz show where the guests get points for being interesting. Stephen Fry guarantees you a groovy Christmas, with David Tennant, Bill Bailey, Lee Mack and Alan Davies.

Stephen discusses various topics beginning with ‘A’, including Adam’s navel, with his guests Danny Baker, Hugh Laurie and John Sessions.

Bantermeisters Alan Davies, Anneka Rice, Sean Lock and Bill Bailey beaver away to impress host Stephen Fry with their knowledge of the topic of beavers. Bulges, bacteria and the Pope’s Friday meal are also the subject of questions.

Stephen Fry muddles through the middle show of the middle series of QI with Aisling Bea, Danny Bhoy, Jimmy Carr and Alan Davies.

Panellists Gyles Brandreth, Susan Calman, Jessica Fostekew and Alan Davies are in revolt in a revolting edition of the popular panel show that is all about revolutions. Sandi Toksvig attempts to prevent them getting in a spin.

Best Episodes Of Long Way Round