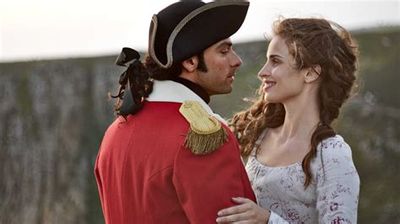 Francis wrongly blames Ross for helping Verity elope with Andrew Blamey. Meanwhile, Mark suspects Dwight and Keren of having an affair, starting chain of events which will have tragic consequences and threaten the safety of eveyone in Nampara.

When French ships are seen off the coast, Sir Francis appoints Ross to lead the volunteers ready to repel any invasion, to the annoyance of Warleggan. George is further angered when Sir Francis criticizes his use of his parliamentary privilege for his own benefit. He vents his rage on Drake, having him brutally assaulted and his forge destroyed. Demelza, disappointed by Ross’s apparent failure to avenge her brother, spends more time with Hugh, while Ross quells a rebellion against Warleggan by agreeing to stand for parliament himself. Rowella finds herself pregnant by…

Ross and Demelza look to forget the past and rebuild their marriage, but new arrivals threaten their fragile reconciliation.

Whitworth’s sexual demands on Morwenna are making her life a misery. When she falls pregnant he brings in her sister Rowella to help her, a girl who immediately spots his weakness. To give the broken Drake a positive in his life, Ross sets him up with his own smithy. At the Enys’s public union both Elizabeth and Demelza notice Morwenna’s unhappiness. Warleggan is perturbed when Hugh’s uncle, Lord Falmouth, singles Ross out as a hero, and Sir Francis Bassett, declaring him a man of the people, proposes him as a member of parliament. Ross declines, allowing Warleggan to…

Ross decides to reopen the family copper mine Wheal Leisure and persuades Francis to help him. Ross also escorts Francis’s put-upon sister Verity to a dance, where he crosses swords with George Warleggan, annoyed that Ross borrowed capital for the mining project from a rival bank to that of his uncle. Verity meets the sea captain Andrew Blamey, who is keen to marry her but George forbids it, claiming that Blamey killed his first wife. The relationship ends when Francis challenges Blamey to a duel, in which Francis is injured, though Demelza proves her worth when she …

Ross and friends embark on another expedition in attempt to free Dr. Enys from French prison. George tries to elevate himself by disparaging Ross. Morwenna finally decides her feelings for Drake aren’t worth the potential repercussions.

An epidemic sweeps through the county and Dwight is grateful to Caroline for providing him with a cart-load of fresh oranges to combat it. Ross meanwhile is thwarted in his efforts to expand the mine, thanks to Warleggan and his proxy, Tankard. To provide finances he strikes a deal with a local smuggler to use his beach to land cargo on, much to Demelza’s annoyance. Ross also goes into partnership with Francis, despite Warleggan’s attempts to split them up, and they open up the mine gaining access to Wheal Grace. Demelza gives birth to a baby boy, Jeremy, which goes …

Joining the Enyses and Ross in London Demelza enjoys the city life and accompanies Ross to a charity ball thrown by Warleggan to celebrate his wife’s pregnancy. Here she attracts Adderley’s predatory attention, leading him to challenge Ross to a duel, the outcome of which makes Warleggan even more anxious to crush Ross. Whilst Demelza, overwhelmed by events, returns to Cornwall, Morwenna has a message for Drake and Geoffrey Charles makes an observation.

Now suspicious about Valentine’s paternity after Geoffrey Charles’ observation, Warleggan is cold towards Elizabeth and, to force an early delivery of her unborn child to allay further suspicions about Ross being Valentine’s father, she takes drastic measures – which do not end well. Drake, however, is overjoyed when Morwenna agrees to marry him whilst Lord Falmouth refuses to accept Ross’s resignation from Parliament because of his duel with Monk Adderley.

The news of Demelza and Poldark’s marriage spreads through the community, threatening Wheal Leisure’s prospects.

The Worst Historial Shows from 2016

Best Episodes Of The Pacific