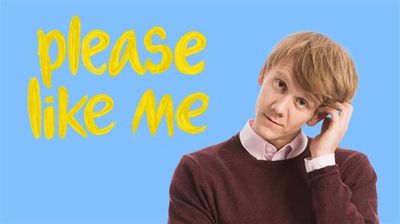 Please Like Me is a TV series starring Josh Thomas, Thomas Ward, and John. Twenty something Josh is going through a number of big changes as he navigates his first decade of adulthood. After being dumped by his girlfriend, he comes…

Patrick dumps Josh. Josh, to distract himself, takes Mum and her friends to the zoo. Tom and Jenny have a weird rabbit funeral and break up, again. At the zoo, Arnold kisses Josh. Dad tells Josh he’s cutting him off financially.

Josh is struggling after his mother’s suicide. Tom and Ella decide to move out and are looking for a new apartment.

Tom creates a pinata filled with secrets that he, Josh, and Clare take turns reading. With Arnold away, Josh decides to explore the benefits of an open relationship by inviting a man named Ben, leading to a night of revelations.

Josh, Tom, and Hannah head to Arnold’s to celebrate his birthday plus support him when he comes out to his family. The party guests encounter awkward conversations and situations while Alan reflects on his current life.

Josh is worried about his mother, so he invites her and his father to a fancy dinner.

Josh goes all out and hosts Christmas dinner for his parents and his friends. When a few things go awry everyone’s flaws come to the forefront and the meal ends with Arnold leaving. Josh heads to the park with just John and a trifle.

Josh and Arnold start to navigate the beginnings of a relationship after Arnold relaxes his just friends position. Josh seeks advice from his friends and family plus he and Tom get chickens.

Arnold attempts reconciliation with his dad, Tom fears his dental visit and Clare proceeds with her pregnancy termination with Josh by her side. Rose is angry with Stuart while Tom tries to cheer everyone up with “Johnzilla”‘s help.

Arnold decides to come out to his parents at his upcoming birthday party but first discusses it with Josh, Tom, and Claire. Mae reveals a secret which Alan reacts very badly towards. Meanwhile, Rose and Hannah go out for a night of fun.

Josh hooks up with Geoffrey. Ella finds a lump on her breast and is afraid it might be cancer. Hannah is contacted by her ex-girlfriend.

The Best Adventure TV Series from 2014