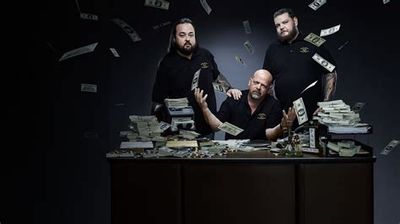 Pawn Stars is a TV series starring Rick Harrison, Corey Harrison, and Austin ‘Chumlee’ Russell. Rick Harrison and his family own and run a pawn shop on the Las Vegas strip. They buy, sell, and appraise items of historical value.

Get ready to GO with the Pawn Stars as a very valuable Pok mon collection makes its way into the shop. Will Rick battle for a sale or will he be defeated? And next, it’s about time the Pawn Stars got a 1926 Dunhill Watch Lighter in the shop.

9. A Show About Nothing

A seller brings in an antique high wheel bike, Chum sells one of Rick’s prized Japanese katanas to UFC President Dana White, and Rick leaves the pawn shop to score a gorgeously-restored grand piano from the 1800s.

Chum takes a stab at three Japanese Samurai swords. Corey pushes to make a plush deal for a Steiff donkey pull toy. Rick welcomes a British WWI poster, but will he close the book on a set of thank you letters sent to an infamous doctor?

Get fired up with the Pawn Stars when a 1800s Wilkinson turret rifle shoots into the shop. Will Rick go in guns blazing or will he fail to pull the trigger? Then, Chum buckles up when celebrity engraved matchboxes from the private jet, “The Starship One” flies in. Will he be able to land these collectibles or will the price be plane crazy? And later, Chumlee volunteers to help the guys write descriptive cards for the shop. Will he get his facts straight or will he need a history lesson

Rick is in Chicago where he has a run-in with a wrestling legend and a chance to clinch a Michael Jordan championship jersey. Back at the shop, Chum looks to score big on a 300-year-old violin. Later, a vintage Batman playhouse places Corey and Chum in a betting mood.

Test your judgment and revisit the best fakes and surprising fortunes ever to appear on Pawn Stars: a two million dollar painting by Claude Monet, a 1715 gold coin from a sunken ship, a set of rare autographed Hollywood Postcards from the 1950s, a bejeweled Black Widow Brooch and a collection of signed Beatles Memorabilia. Real or fake, these items could mean big bucks or a big bust for the shop.

2. May the Pawn Be with You

Take flight with a 1911 first edition novel of Peter Pan, but would Rick rather spend his Shenandoah on a piece of scrap metal from an infamous fallen airship?