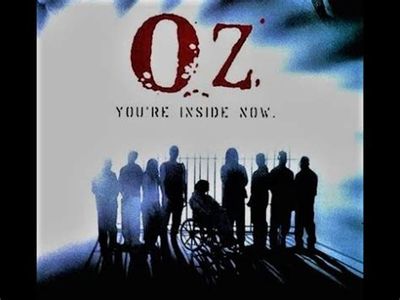 New inmate Burr Reading arrives, ready to take charge of the African-American drug scene. Dr. Nathan returns to Em City, and finds the biggest adjustment is dealing with her feelings for O’Reily. Tidd tries to strike up a deal with Schillinger.

In the Season Five finale, Robson goes to extremes to remedy his gum dilemma, Meanwhile, McManus struggles with personal turmoil over his decision to stay at Oz and Rebadow deals with his grandson’s fate.

Morales looks to pit the Chinese against Redding. Alvarez offers Glynn his services as an informant as a way out of solitary. Dr. Nathan announces that Em City inmates will be selected to test a trial drug that could reduce their time behind bars.

7. A Cock and Balls Story

Season Four premiere. The world of Oz–an experimental prison within a prison known as the Emerald City–reopens its doors with the inmates still on a 24-hour lockdown and prison officials struggling to end the hostilities.

In the ‘Emerald City’ experimental unit of Oswald State Penitentiary, we meet some of the diverse inmates who exist in a pecking order of Gangbangers, Latinos, Muslims, Westies, Aryans and Wiseguys.

In the Season Four finale, Hill discovers where his true allegiances lie in Oz. Redding’s plot to use the Colonel against Morales has an unexpected outcome. Beecher’s agony about his parole hearing leads to a shocking season climax.

As Querns implements his new course of action, the dynamics of Em City start to change, causing friction with Officer Murphy. Beecher falls deeper into depression as he wonders about the fate of his children.

Tobias learns who killed his father before being released from prison. Cyril begins shock therapy while receiving an execution date. Said is allowed to start his own company.

2. A Town Without Pity

With things wild in Em City, O’Reily begins a surprising affair. Zabitz asks Schillinger for protection from Keller–who tries to get into the rehab program to make amends with Sister Pete. Beecher looks to get even with his children’s kidnapper.

1. A Game of Checkers

After a visit with his sons, Schillinger realizes he needs to get paroled. He convinces McManus to let him return to Em City with the condition that he leaves Beecher alone. Beecher comes out of the hole hell-bent on making sure Schillinger doesn’t get paroled. McManus gets wind of Wittlesey and Ross’ contraband operation and orders her to shut it down. Ross makes it very clear to her that this will not happen. The Muslims meet and discuss how the riot will begin. However, two rednecks beat them to it by fighting over a game of checkers. This causes all the inmates to…

Best Episodes Of Curb Your Enthusiasm