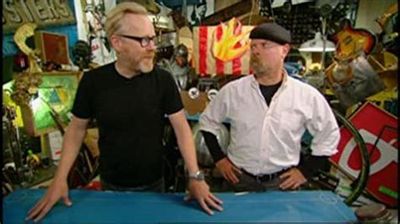 Jamie and Adam try to escape from Alcatraz using a raft made from raincoats. In between, they test to see if duck quacks can echo and if Red Cross has mind control chips for their patients.

Can Adam and Jamie survive on a deserted island using just duct tape?

Jamie and Adam take wing to test if a person with no flight training can safely land a 747 and if a plane can take off from a conveyor belt speeding in the opposite direction. Tory, Grant, and Kari jump on some Hollywood-inspired skydiving myths.

In this action-packed episode of Mythbusters, Adam and Jamie turn dirigible detectives to try and solve one of aeronautics biggest puzzles, while Kari, Tory and Grant come face-to-face – and have to flee – from some of Nature’s natural-born killers.

Adam and Jamie test whether Hollywood heists are really possible.

The Mythbusters try everything they can think of with duct tape; lift Jamie and lift a car, fix a boat and build a boat. Then to squeeze in everyone’s favorite, explosions, they build a cannon.

Jamie and Adam try to scientifically explain the recently publicized and highly entertaining chemical reaction caused as a result of placing a Mentos candy into a 2-liter bottle of Diet Coke. The rest of the Mythbusters team explores the possibility of a standard postage stamp causing enough imbalance in the rotating assemblies of a helicopter to cause it to crash.

Stow your tray tables because in this aviation extravaganza Adam and Jamie tackle two flights of fantasy that sees a MythBuster launched to the edge of space. How tough is U-2 aircraft? How practical is a remote control multi rotor drone?

Jamie, Adam, and the build team (Kari, Grant, and Tory) reflect on their years together working on Mythbusters. Celebrities offer their thanks to the cast and crew as the series wraps up after 14 years.

The Best Action Shows from 2005