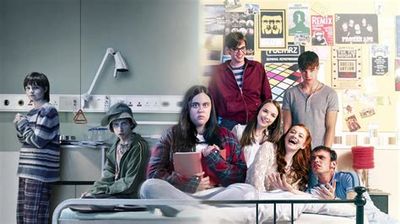 My Mad Fat Diary is a TV series starring Jodie Comer, Ciara Baxendale, and Dan Cohen. Set in 1996 in Lincolnshire, the show tells the tragic and humorous story of a very troubled young girl, Rae, who spent four months in a…

Rae’s mother finds out that Rae set off the fire alarm and she is forced to appear before the college principal who decides against suspending her but puts her on a warning. At the therapy session Rae is impressed by an articulate outburst from fellow group member and student Liam, who saw her set off the alarm but swears he told nobody. Back home Rae’s mum announces that she is pregnant but Rae herself is far from happy as she increasingly wonders why such a good-looking boy as Finn wants to date her, particularly as his previous girlfriend was the slim blonde Stacey…

Rae finds that she is vying with Chloe for Finn’s affections. The gang is going to a rave but Rae’s mother puts her foot down and tries to prevent her. After being sick Rae realizes that this is due to the combination of alcohol and her medication so she decides to stop taking the latter. This makes her behave oddly, freeing Karim’s cage birds, some of whom die and leading to a huge row with her mother. After laying low at Finn’s she goes to the rave where she is upset to see Chloe and Finn kiss. She returns home and patches things up with her mother but gets a call …

Rae’s still madly in love with Finn, but will her insecurities sabotage their relationship before it’s even begun? Meanwhile, Kester encourages her to face her demons and finally confront the truth about what happened to Tix.

Feeling guilty that she was not there for Tix Rae is also depressed when Chloe tells her of her feelings for Finn and imagines running her over. Things get worse when Rae realises that Chloe has read her diary and tries to commit suicide but is herself run over. Whilst Rae is unconscious Tix appears and tells her how life would be poorer if Rae was to do away with herself so, after being discharged from hospital, she goes to see Kester Gill, discussing her suicide attempt and her feelings for her father. On Kester’s advice she goes to her mother’s wedding and gives a …

Chloe is meant to be singing the lead in the college musical but she has disappeared, not for the first time. Rae goes to her house and discovers her diary. She is initially appalled as Chloe describes her affair with P.T. teacher Stephen and distorts facts about Rae, whom she sees as a rival for Finn. However reading on she finds that Chloe describes her as ‘ a beautiful person, not bitchy and broken like me’ and sees that Chloe is clearly less self-assured than she appears. Rae starts to feel for her, recalling the times Chloe helped her. At the therapy group Liam …

Without Finn Rae does her best to fit in with a clique of cool, slim girls led by Stacey and, with her tastes in popular music and advice to love-lorn Lois about getting a boyfriend winning them over, she actually starts to bond with them. Only Liam has worked out her terrible secret, her refusal to eat in front of other people because of her weight problem though eventually she finds herself able to confide in Stacey about it. However this is a terrible mistake as she soon works out that Stacey surrounds herself with people who are vulnerable so that she can bitch …

4. Don’t Ever Tell Anybody Anything

Rae and Finn are really hitting it off but she is scared he still sees her only as one of the boys. She tells Chloe about her self-harming and proposes telling her other friends in order to be honest. Then her mother and Karim go to Tunisia for a few days, Rae being warned against having any parties. However when Rae discovers that the postcards supposedly sent by her absent father working in Scotland were sent by her mother she rebels and has a party. She is also angry with Dr Gill because, although Rae knows his marriage is in difficulties, he never tells her about …

Rae and Chloe fall out when Chloe admits she is secretly dating their P.E. teacher Stephen Carrisford. There is further disharmony when Chop and Finn invite Rae to a rock concert but not Chloe. In fact they regard Rae as one of the lads, rather than a girl, which disheartens her and, after an encounter with the Green Lane gang of bullies, she starts self-harming again. Rae admits to Dr Gill her envy of Chloe after which she is again picked on by the Green Lane gang but rescued by Finn, for whom she realises she is falling. However, on the day of the concert, she stays…

1998 last summer in Stamford. The gang plan to celebrate their last summer together, Before leaving for uni. Rae gets a job in a record shop and doesn’t want things to change.

Rae seeks out Kester, who reiterates his view that she no longer needs therapy and so she tries to channel her energies into revision but is distracted by thoughts of Finn with Katie. Katie tells her nothing happened and delivers some home truths on how Rae should stop laying her problems onto Finn but this has an adverse effect and leads to a suicide attempt. However a surprise announcement from her mother and an instruction by Kester to look for the answers to her problem in the diary helps Rae to take a positive outlook , advising an insecure Chloe and parting as a…

The Worst Animation/Cartoon Series from 1998