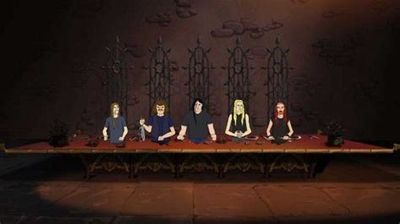 The world economy is crumbling and waiting for the next Dethklok album to stimulate it back into order. It’s up to Dethklok to get the album just right and finished on time.

Dethklok is fed up with Ofdensen knowing more about their stuff then they do. They want their fifth of everything now! So they hire an efficiency expert to help increase their weekly allowance.

After announcing the breakup of Deathklok, each member tries his hand at a new career. When they perform their farewell concert in Reykjavik, Iceland, Mr. Salacia takes the opportunity to strike.

Believing Ofdensen is dead, Dethklok is forced to become their own managers while dealing with repairs to the destroyed Mordhaus and trying to plan their biggest concert to date. Their efforts are stalled however when a past acquaintance cuts off their unlimited financial freedom to get revenge against the band.

Dr. Rockso, having relapsed into his cocaine addiction, seeks the help of his estranged friend, Toki. More unwanted visitors manifest in the form of Dethklok’s mothers, who are going to visit for the upcoming holidays. Murderface sets out to stage a Christmas special with production partner Dick Knubbler, but the only group willing to finance the show is the “Church of Christian Churchology”.

In METALOCALYPSE: the DOOMSTAR REQUIEM A KLOK OPERA, we pick up directly after the abduction of Dethklok guitarist Toki Wartooth in the season 4 finale. With his life in danger, his only salvation can come from the four most selfish human celebrities on earth-his bandmates, extreme metal band DETHKLOK. Will they be able to get past their own egos to help someone besides themselves? Find out in this one-hour heavy metal rock opera special with a completely original score.

Facing public scrutiny following brash statements made by Murderface at a press conference, Dethklok decides to lift their worldwide ban on Dethklok tribute bands. While exercising their right to approve or disapprove of any tribute act the band discovers that Toki has been posing as Skwisgaar in a tribute band called Thunderhorse. Trying to distance themselves from celebrity status and re-connect with normal people, Dethklok decides to join Thunderhorse.

Dethklok unleashes a troll that wreaks havoc across Finland, and forces the band to play without electricity.

2. The Metalocalypse Has Begun

General Krosier and Cardinal Ravenwood hire an assassin, 216’s brother, to kill Dethklok during a show and plan a military strike against them.

The Best Adventure TV Series from 2019