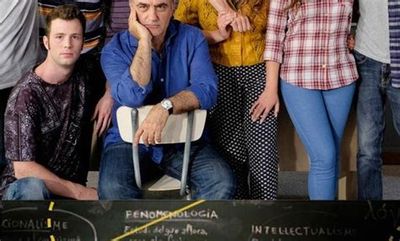 Merlí is a TV series starring Francesc Orella, Pere Ponce, and Carlos Cuevas. TV series about a high school philosophy teacher, Merlí, who teaches in an original way, and about the students of his class, including his own son, and…

Merlí tells his mother a shameful lie. Things heat up fast between Gerard and Oksana. Finding himself attracted to his new boss, Pol confides in Bruno.

When Coralina tries to get rid of a transgender substitute teacher, the students stage a protest. Marc seeks career advice from Bruno’s grandmother.

Pol suffers financial and personal difficulties at home. Gerard finds evidence suggesting his mother has a lover. Joan rebels against his parents.

3 students decide to play a joke on Coralina, but it causes that they and two of the girls receive a punishment that at the end results in a very rewarding experience for all of them.

Joan refuses to participate in the school food drive organized by his parents. Oliver is ridiculed and shunned by his male peers, including Bruno.

The students throw a wild birthday party for Pol at Mònica’s house, where Joan makes a drunken confession, and two friends act on a mutual attraction.

An intimate video of Mònica circulates among the students. At the museum, Marc spots Merlí and Gina kissing. Ivan learns his mother has a boyfriend.

Joan decides to stop being the “nice guy” and try new things. Oliver makes an announcement to his parents. Bruno says goodbye to those closest to him.

The Best Mystery Series from 2009