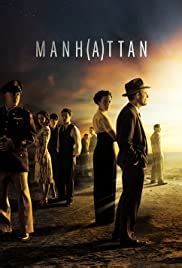 Manhattan is a TV series starring Rachel Brosnahan, Michael Chernus, and Christopher Denham. In 1943, in Los Alamos, New Mexico, a team of government scientists is working on the top secret Manhattan Project in a race to produce an…

The arrival of a high-profile guest shakes things up; Frank is haunted by his past.

Charlie is forced into a new leadership role in the race to build the world’s first atomic bomb.

Liza faces off against Darrow as Abby learns a secret about Oppenheimer.

Days before the world’s first nuclear explosion, everyone races to secure their place in history.

A development overseas re-invigorates the hunt for a spy on The Hill. Charlie and Abby make a sacrifice when the plan with Frank is threatened.

2. Spooky Action at a Distance

Charlie and Frank are forced to work together for the good of the project. When they run into a problem, Frank turns to an unconventional resource.

The countdown to the first nuclear weapon test goes on, as Frank Winter races to apprehend a Soviet spy who intends to sabotage the gadget. The scientists from the hill withdraw from the Trinity site to witness history being made.

The Worst Romantic Series from 2011

Best Episodes Of The White Queen