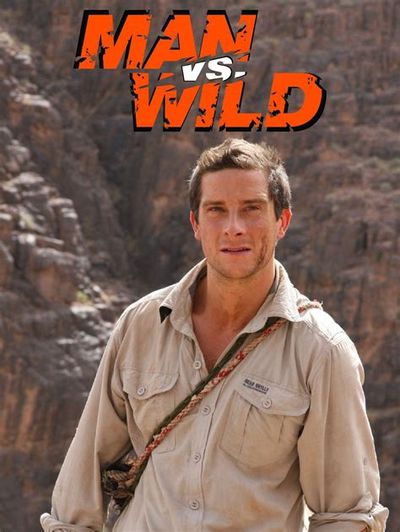 Only Bear would pole vault down a rocky cliff and over river rapids. But he takes time later on for a dip in the ice cold water of the Snake River and a frozen lake.

Bear traverses a swamp and jungle in the Sumatra rain forest. Naturally he chose the rainy season but he finally manages to find some good eating.

While hundreds of thousands of tourists visit Iceland every year to witness freezing glaciers, steaming geothermal areas and huge black sand deserts, more than a thousand visitors find themselves requiring a rescue. Adventurer Bear Grylls demonstrates how to make a snow cave, find water in deep tunnels and avoid frostbite in this Arctic environment. Because finding food is a problem in this climate, Bear is forced to eat a sheep’s eyeball and catch a ptarmigan (a wild bird). He also has to deal with blizzards and 50 mph winds as he attempts to reach safety.

Lost in the Panamanian rain forest Bear finds his bearings and navigates to his prearranged helicopter pick up point. Along the way he turns geological obstacles to his advantage and points out unexpected dangers and benefits. Then Bear demonstrates the difficulty of navigating a mangrove swamp.

Even by Australian Outback standards, Kimberley is a vast and desolate wasteland, home to an inhospitable wildlife with a record concentration of poisonous species. Bear braves it, paying due tribute to traditional Aboriginal survival skills, showing how stranded tourists may still hope to get out alive. Even he wrestles with the scorching heat, leaving most of the and dry and very hard to find water or food, so you can’t be picky, eating anything not dangerous and drinking what you can, even recycling your own filtered fresh urine. After a storm in a hastily …

Bear para-glides into the Montana Rockies. After risking his life climbing down a water fall on a rotten old log and rope ladder that is a bit too short he tries to cross a lake on a holey canoe using a make shift kite and manages to make it part way. Surviving these exploits he finds an unstable rock wall to climb, a collapsing mine to explore and a chasm to jump over. Then it gets really dangerous before getting absolutely crazy.

Bear Grylls takes the viewer behind the scenes to meet the crew that follows his every step. Whether he’s jumping from helicopters or eating the unimaginable, the camera is never far away from the action. Now the crew gets to tell their side of the story.

Bear demonstrates island survival but still decides to head to sea on a makeshift raft after gathering supplies. He ends up island hopping until he finds an inhabited island.

Bear shows the challenges of stranding on an uninhabited minor Hawaiian island, as after shipwreck, albeit parachuted. He explores it for food, other resources, a suitable shelter, a signal fire, rain collection. Spear fishing and diving are very hard, the yield modest. So he builds a raft and sets out in high sea, despite the risks including thirst, hunger, sunburn -despite self-made skin protection- and a hungry tiger shark.

Best Episodes Of The Moaning of Life

The Best Crime Shows from 2017