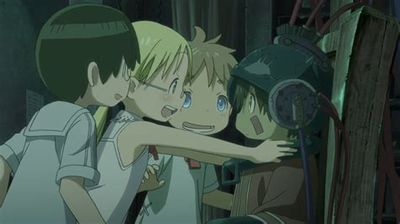 While exploring the Abyss, Riko comes across something she has never seen before. How does this new discovery impact her?

Reg and Riko continue their descent after they leave Ozen’s Seeker Camp. Riko’s mettle is tested as Reg passes out and she has to fend for herself.

Riko and Reg find out more about their past but the question still remains, who or what exactly is Reg?

7. Poison and the Curse

Riko and Reg venture into the fourth layer, the Goblets of Giants, where their adventure takes a turn for the worse.

Reg goes on his first cave raid. Meanwhile, Riko makes preparations to go into the abyss to find her mother.

Ozen reveals more about the Abyss as well as the truth behind Riko’s origins. What will happen when Ozen shows her true colors?

Nanachi and Mitty’s past is revealed. How did they become what they are and who is responsible for it? Meanwhile, Riko is on the mend after her injuries.

Nanachi sends Reg on a mission to find certain items that could possibly save Riko. Meanwhile, Nanachi reveals a little more about themselves.

Ozen tasks Riko and Reg to survive alone outside the Seeker Camp. Do they come out alive and unscathed? Or does the Abyss have a dirty trick up its sleeve?

1. The True Nature of the Curse

Nanachi shows Reg the truth about the Abyss. Meanwhile, Riko is still recovering from her injuries when she has a strange dream.

The Best Adventure TV Series from 2000