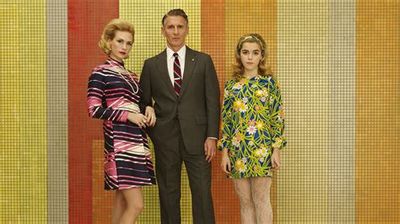 Lane’s entire world comes crashing down after getting busted for forging Don’s signature on a check, and Sally experiences an awkward rite of passage while spending the weekend with the Drapers.

With his personal and professional life crumbling around him, Don positions himself for a change of scenery. Meanwhile, Pete’s life is falling apart as well, thanks to the meddling of Bob Benson.

Don takes the kids to California and comes back with a surprise announcement. Meanwhile, Betty fires the kids’ nanny before they move out of the old house over one questionable incident, and Peggy gets a shot at a new account.

The partners discover that the firm is losing its independence and there’s nothing they can do about it. Peggy is not sure if she wants to come along. Meanwhile, Pete and Trudy have trouble getting their daughter into private school.

6. Guy Walks Into an Advertising Agency

The bosses come in from London to reorganize Sterling Cooper, but a key player’s career is sidetracked by a freak accident. Meanwhile, as Joan prepares to leave her job, her husband gives her some bad news.

Peggy has second thoughts about her Burger Chef campaign when Don is asked to pitch her commercial, Pete visits his wife and daughter on his trip back to New York, and Bob Benson gets some surprising news from G.M. about the account.

Don’s journey ends in California with Anna’s niece, Stephanie, where he contemplates his future. Roger decides to marry Megan’s mother, Marie. Joan has a business proposition for Peggy, who is coming to terms with her feelings for Stan.

Don goes AWOL from McCann Erickson in the middle of a meeting. Joan quickly gets fed up with the sexism at the new firm. Roger and Peggy put off reporting to their new jobs as long as possible.

A peaceful hotel getaway ends in disaster for Don and Megan, an LSD trip could have a disastrous effect on Roger’s marriage, and Peggy loses her cool after an unsuccessful pitch meeting.

Don deliberately delays returning an important call from California, because he knows it’s bad news about Anna. Instead, he keeps himself occupied by forcing Peggy to miss her birthday dinner to pull an all-nighter with him for a client.