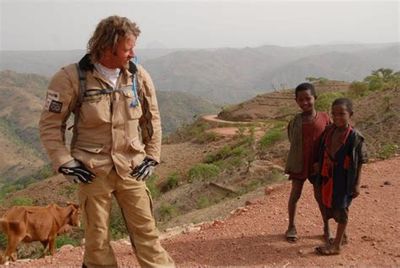 Long Way Down is a TV mini-series starring Ewan McGregor, Charley Boorman, and David Alexanian. Two guys take a trip of several months on motorcycles. They travel from the North of Scotland, down through Europe, into Africa, finally…

Ewan, his wife Eve and Charley begin their second day of riding in Malawi. Reaching their destination Lake Nyasa Ewan is excited to be on the bikes with Eve. Riding down to Senga Bay producers David and Russ surprise Ewan by flying in his mum to see him. At the UNICEF project in Malawi, a childcare centre Ewan, Charley and Eve see first hand how the charity is helping children in the area. Reaching the Zambian border the boys are staggered at how quickly Eve’s riding has improved. They set up camp for the night with a local tribe. Riding down towards Livingston the …

After a miserable ride to London, Ewan and Charley push on to France. Despite arduous weather conditions, they must stay on a strict time course.

Ewan and Charley conclude their trip to the Okavango Delta where Ewan has an extremely close call with an elephant. The boys have a last 120 Km ride over sand to reach the Namibian border, their last push through the tough terrain. Crossing into Namibia the boys are shocked at how desolate the land is and only just make it to a remote petrol station before their tanks run dry. That evening they stay with the Namibian bush people where they witness a healing ceremony and enjoy the company and culture of the tribe. Pushing on to the Skeleton Coast the boys enjoy the …

Now over the border, and in Kenya, the team find themselves stuck in bandit country when Claudio’s shock absorber goes yet again. They set up camp for the night – aware of the dangers that surround them. With stomachs rumbling and the thought of eating another packet dinner frightening, the team makes a unanimous decision to sacrifice a goat for their supper. Ewan and Charley visit Turbi Primary School that was subject to a horrific massacre in 2005. They see the horrendous effect this has had on the staff and pupils, but are also able to see how they have been able …

Ewan and Charley attend a Rwandan wedding reception and then meet the president of Rwanda, Paul Kagame. Then they tour the Rwandan genocide museum.

In Libya, the boys visit Tobruk War Cemetery; Ewan is touched by the amount of people buried there from all over the world. It is an emotional day for the boys as they realize how much they miss their families back home. Arriving safely in Egypt the team are reunited again when David and Jimmy meet them at the border. Riding through Egypt there is still doubt as to whether they will make it to Aswan in time for the ferry. They are starting to feel the strain of the long days on the bikes, if they don’t make it in time they will have to wait for a week before they can …

Passing by Khartoum, the boys have been riding for a while and see the aftermath of a car crash and pull over to the roadside. One of the drivers explains he fell asleep at the wheel and crashed his truck into another vehicle. Police arrive and are more interested in the bikes than the accident scene. The head of police takes a fancy to Ewan’s bike and decides to take it for a test ride much to Ewan’s horror. As the boys head towards the Ethiopian border they get very excited when they see monkeys in the wild for the first time. Reaching the border into Ethiopia, the …

After several hours of struggling with the muddy river crossing, the bikes and cars are finally across. Riding on, Ewan gets very excited when he sees wild Zebra’s for the first time. They ride to Naivasha to meet with Charley’s old friends where they are given a plane ride. Ewan and Charley are amazed at the wildlife and end the day picnicking on Lake Naivasha watching hippos. Making it to Uganda, the boys are ecstatic they have made it this far. They visit a coffee factory and are treated to an amazing song and dance by the staff. The team takes some time out and …

After finding a suitable base Ewan and Charley spend several months in London prior to departure, planning a route. Eve, Ewan’s wife, decides she would like to join part of the trip. Ewan is over the moon but Charley’s not so sure as she’s never ridden a bike before. Meanwhile, as part of their training, the team attends a hostile environment course where they are faced with the kind of difficulties and dangers they may encounter in Africa. Two months before departure, Ewan has an accident and breaks his leg jeopardizing the future of the trip. As the departure date …

Leaving the romantic city of Rome they head down the Amalfi Coast as they make their way to the edge of Italy, ready to catch the ferry over to Sicily. After a days rest and new tires on the bikes they are ready to hit the new terrain. The team embarks on the ferry as they leave Europe behind and sail over to Tunisia. Whilst on board tension and voices rise as there are concerns over the safety of Charley’s wheelies. With a long boat ride still ahead there is an atmosphere amongst the team. Meanwhile, news arrives that the two David and Jimmy, the two Americans on the…

The Best Action Shows from 2018