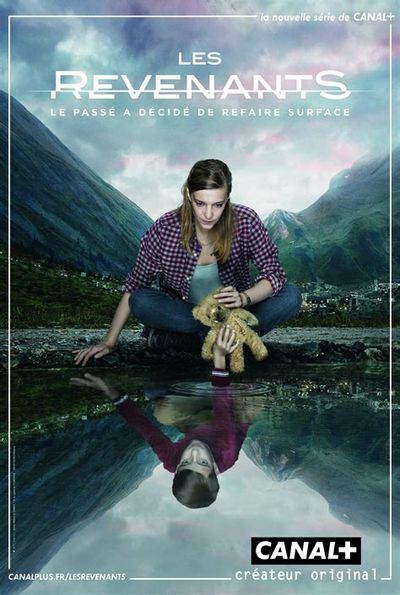 Les Revenants is a TV series starring Anne Consigny, Clotilde Hesme, and Frédéric Pierrot. In a small French mountain town where everyone knows each other, the dead begin to inexplicably return as if their death never happened….

A massive electrical outage shuts down the town’s power, creating a sense of unease, as people are drawn together in unexpected ways. Camille and Lucy find new roles within the community, Julie seeks refuge with an old friend and Lena grows closer to her mysterious rescuer.

For months The Returned have been hiding in an area rendered inaccessible by the flooding. Julie, Victor, Camille and Claire have grown used to life as refugees amongst them but two of Camille’s classmates are about to cause problems.

As the returned come out into the open they find they are unable to resume normal lives. Camille and Simon both find themselves abruptly rejected and Victor embarks on a search for his murderer. Incapacitated, Lena is found by an elusive figure.

Tensions are high between the living and the dead, as a newer, creepier wave of the returned descends upon them. With the townspeople in fear and the stakes higher than ever, everyone will have to choose sides.

After the shooting the Seguret family try to leave town, but Camille cannot stay with her family and must join The Returned. Alcide takes Simon and Adele’s baby to Lucy, but it is too late The Horde has dispersed.

Julie visits Victor’s former home where an elderly neighbor tells her the reason for the massacre of his family. Berg and Jerome also decide to visit the hamlet where Victor’s family were murdered and find his old drawings.

Adele struggling with herself about Simon and think that she saw his ghost. Meanwhile Camille goes out to find her friends. Victor is still silent and says nothing

Life in town is becoming gradually more disturbing. Determined to come out of hiding, Camille invents a new identity, Lena is horrified by a mysterious physical affliction, and Julie finds herself paralyzed by fear as an old trauma resurfaces.

One year ago, Thomas returned home to find that Adele had tried to commit suicide by slitting her wrists. In the present day, water levels at the dam keep falling revealing more of the old village that once existed there. Madame Costa tells Camille she died from starvation all those years ago after the old dam broke and everyone and went without food for three weeks. She also takes her to task for lying to the Koretskys about their dead child. Camille learns there is a cost of those lies. Serge and Toni are making their way through the forest but soon find that are …

Camille, a teenager who was killed in a bus crash, returns home 4 years later.

The Best Science Fiction Shows of all time