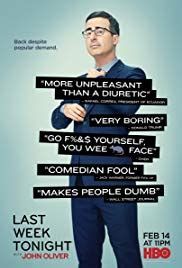 John talks about the Egyptian president and economic crisis, the Guantanamo Bay shutdown and Donald Trump.

John Oliver recaps the first year of the Trump presidency and gives a warning about the three techniques he uses to undercut criticisms without addressing the related issues.

Stupid Watergate is a reference to Nixon presidency’s scandals which led him to resign and Oliver contrasts it with current series of scandals of Trump and how they’ve led to talks of impeachment just within 4 months of his presidency.

[HBO] HD. Main story: A look at the growing number of authoritarian leaders around the world. Plus, the fate of Russell Crowe’s jockstrap.

After winning a legal battle over his episode Last Week Tonight with John Oliver: Coal (2017) involving a Trump-allied coal executive and John’s giant squirrel, John Oliver explains how ‘SLAPP suits’ like this one are designed to stifle public dissent.