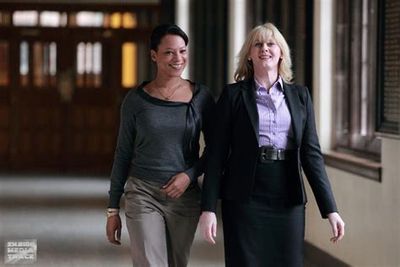 Last Tango in Halifax is a TV series starring Anne Reid, Derek Jacobi, and Sarah Lancashire. Re-united after 50+ years apart, Celia and Alan decide to marry. At age 16, Alan’s late wife failed to pass on a letter from Celia, his…

Alan and Gary hit it off very well with Alan explaining he had no idea that he had a son. When Alan tells Celia about Gary it is a bumpier ride, as she is annoyed that Caroline and Gillian knew ahead of her. Whilst she appears to relent she nonetheless does not accompany the rest of the family to dinner with Gary and his wife in their palatial home. Gillian resigns from the supermarket after a run-in with Robbie’s ex-girlfriend, prompting Robbie to propose marriage to her whilst Caroline and Kate go ahead with their wedding but there is one important guest who is …

As John moves into Judith’s untidy flat, Ellie moves into the farmhouse and Robbie installs his much younger girlfriend Cheryl in his house Caroline hears that both Judith and Kate are pregnant and rows with Kate as a result. To compound her problems Lawrence moves in with John and it falls to her to invite Celia’s sister Muriel to the wedding. Years ago the two women fell out over a man and the rift has never healed as Alan discovers when he and an icy Celia visit the garrulous Muriel. Caroline and Gillian press on with organizing the wedding venue and get drunk and …

Anxious to get in with Gillian John is very helpful at reconciling Ellie and Raff but unfortunately Judith arrives, exposing John’s one night stand with Gillian, and causing trouble with Robbie. Kate and Caroline spend a weekend at a hotel, where Caroline meets sperm donor Greg. However he is a self-centred bore who goes on about his old times with Kate and Caroline feels excluded. Alan and Celia baby-sit Caroline’s sons but one gets drunk and the other one beaten up and robbed and Celia is glad of her husband’s support. Hearing that school-friend Maurice has died …

Caroline gets a job at a notoriously rough school in Huddersfield and moves, with Alan and Celia and her two sons, to a ramshackle farmhouse outside the town – not that Celia is happy with her accommodation. On a girls’ night out Caroline confides in Gillian, who also admits she feels haunted by late husband Eddie, especially after Robbie has a serious accident on the farm. Celia however is buoyant when she lands the role of Madame Arcati in a local production of ‘Blithe Spirit’ and ropes in a reluctant Alan when another cast member falls ill. Alan’s friend Harry …

While Christmas shopping together, Caroline tells Gillian the reason for her new job and how she met new girlfriend Olga, who encouraged her to take it. For Christmas dinner both families turn up at Caroline’s house, along with John and the newly sober Judith, now a successful children’s author. Whilst Alan confesses his stage fright to Harry, Celia leads a séance. Gillian makes a startling confession to Robbie. The play goes ahead with Alan triumphant whilst Olga lets Gillian in on a secret about Caroline, who starts her first day at the new school with unbounded …

Whilst Gillian considers Robbie’s marriage proposal John arrives at the farm with Alan, who tells her that Celia did not attend Caroline’s wedding. With Alan asleep John also proposes to Gillian but she knocks him back. Caroline confronts her mother over her absence and they eventually reconcile whilst Celia joins the rest of Alan’s family for another meal with Gary and his wife. The celebration is interrupted when Caroline rings to say that Kate has been hit by a car and is in hospital, requiring surgery.

Alan is discharged from hospital and it is agreed that he will move into Celia’s granny flat as it is more conducive to recovery. Gillian feels slighted and things are not helped when John rings to say he loves her and, after she has admitted to Caroline her drunken one night stand with John, she finds that Caroline has told her mother, who has told Alan. He is disapproving, reminding Gillian how she fell pregnant at fifteen. John turns to Judith for consolation but she gets drunk and falls downstairs, making up Caroline’s mind to move Kate into the house. Alan and …

As Alan and Celia spend the night in the haunted house their daughters worry and a frantic Gillian even persuades Raff and Robbie to visit her. After denying any knowledge of setting fire to her Land Rover Robbie even begins to get on with Gillian. Caroline also stays over and the two women begin to bond as they admit their fears to each other. However it is Paul who works out where the elderly couple are as he knew they were seeking a wedding venue and the police find them. Much reconciliation follows but,as John tells Carolie he lent Judith money,she admits to an …

Nobody thanks John for his revelation though Caroline’s younger son Lawrence accepts the situation. Celia,on the other hand,does not and shows her disapproval strongly,shocking Alan and Gillian. Celia agrees to meet Kate at a family dinner party but her bigotry ruins the evening as well as driving a wedge between Kate and Caroline and Alan calls the wedding off,disgusted by this new side to his fiancee.Caroline and Celia have a huge row but later Celia visits Kate,explaining that,in view of her own stale marriage,she only wants the best for her daughter but now …

The Worst Animation/Cartoon Series from 2020