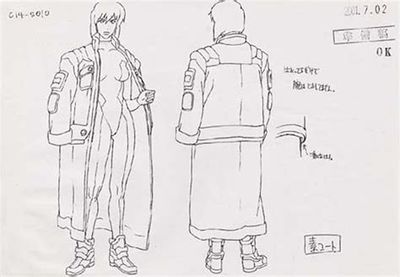 The Chief Cabinet Secretary formally relieves the PM from her ministerial duties for her decision to call in the UN to mediate the Dejima crisis.

Section 9 is compromised, and the authorities seeks ways of dismantling the Section.

Section 9 regroups from the fire fight and the body of their dead teammate is airlifted out of Dejima.

Major Kusanagi gets into trouble when she is transferred into a new host body. Aramaki investigates the abduction of his brother.

Prime Minister Kayabuki meets with her cabinet to discuss the Fukuoka nuclear bomb incident, but the cabinet has already decided to deploy the army to retrieve the remaining plutonium supposedly hidden on Dejima Island.

One of the Tachikoma is acting strange after being out all day with a little girl. The contents of the cyber brain that the Tachikoma found, alarms Section 9.

4. This Side of Justice

Togusa makes new discoveries on the Laughing Man. He investigates the matter.

The final episode completes the first stand alone series. Togusa is released from prison but has no idea what has happened to section 9 members and still can not believe that the chief abandoned them. Episode reveals what happened to the members of section 9 and has a long conversation with the laughing man that wraps up the series.

The JMSDF lets loose with another round of naval artillery fire and missile strikes as refugees on Dejima attempt to evacuate the island aboard makeshift rafts and boats.

The Worst Crime Shows from 2019