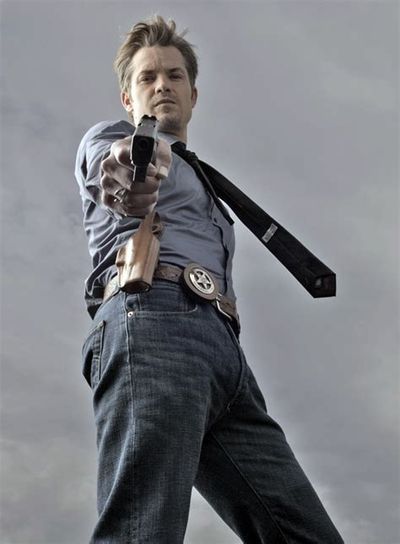 When Art is shot and is in critical condition, the marshals round up the usual suspects, until an unlikely person confesses. Meanwhile, Ava prepares for the fallout for killing Judith, and Boyd tries to make a new deal with Wynn.

With Avery Markham and Wynn Duffy’s help, Raylan sets up a trap for Boyd. But Ava informs Raylan that he didn’t take the bait and offers up a new route to put Boyd away for good.

Raylan takes the fight to Nicky Augustine after he threatens Winona and their unborn child, while Boyd and Ava try to dispose of Delroy’s dead body before it is identified by the authorities.

Still recovering from his gunshot, Raylan takes himself off of desk duty when one of Wynn Duffy’s associates is involved in a murder. Meanwhile, Ava takes over Boyd’s business while he is back in jail.

Raylan tries to track down Dicky after Helen is killed, but he is forced to turn to Arlo to make a deal and get Mags’ blessing.

Drew Thompson is now in custody of the marshals, but can Raylan get him out of Harlan before Theo Tonin and Boyd’s men can get their hands on them?

The marshals needs to make a deal with Boyd to take down Darrell Crowe Jr., but Dewey unexpectedly gets in the way. Meanwhile, Ava’s enemies in prison begin to make their move against her.

As the coal mine makes one final attempt to negotiate with the Bennett clan, Loretta begins to piece together what the Bennetts did with her father.

The bad blood between the Bennetts and the Crowders reaches its boiling point and results in bloodshed, and Loretta returns from Lexington to avenge her father’s death.

Raylan is captured by the authorities, but Art reluctantly lets him go and puts him back on the case. Avery gets to Ava and questions her about his missing money, but she winds up leading Boyd straight to them.