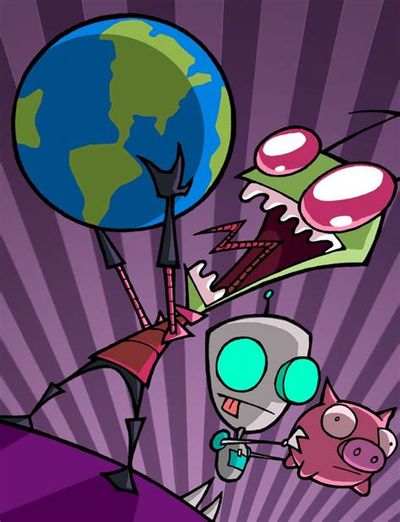 10. The Frycook What Came from All That Space

Angered by ZIM’s leaving his banishment to join OID II, ZIM’s former boss on Foodcourtia kidnaps him and makes him work at his old job.

The Tallest tell ZIM that they will only grant his request for weaponry after he attains military training./ZIM accidentally creates a slowly expanding explosion.

Zim uses his hypnotic zit to try and get a secret out of Dib.

7. A Room with a Moose/Hamstergeddon

ZIM implements his most horrific plan yet, a room with a moose. Also, ZIM uses the skool’s pet hamster to try and destory the Earth.

6. The Girl Who Cried Gnome/Dibship Rising

When a Girly Ranger selling cookies gets stuck in a hole in ZIM’s lawn, the result is a media circus./Eager to use Tak’s ship, Dib erases her personality and downloads his own.

5. Door to Door/FBI Warning of Doom

ZIM becomes obsessed about winning the mystery prize in The Skool candy drive / ZIM must return a belated video to the store or face the wrath of the FBI.

4. Backseat Drivers from Beyond the Stars

Despite the fact that they are closer to Earth than ever, The Tallest won’t stop by to check out ZIM’s latest plan.

Zim gets an annoying best friend and Zim shrinks himself to a microscopic size to get into Dib’s body.

Dib is given powers beyond human comprehension, and Zim tries to discover who threw a muffin at his head.

Zim studies germs and then steals his classmates’ internal organs.