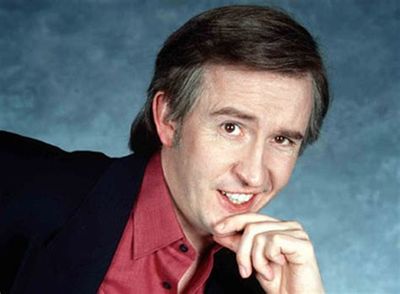 Alan’s house is finally finished and he gives each of the builders a leaving present – a copy of his book “Bouncing Back”, which has not sold well at all and is due to be pulped. Sonja is keen to move in with him as her flat is being demolished to make way for an office block, but Alan is wary of commitment and prefers to “come to an arrangement”.

As Alan hasn’t got a second series he faces a difficult choice, get a smaller car or make everyone at Pear Tree Productions redundant. He has a date with Jill so it’s time for a visit to the local Owl Sanctuary.

With the Linton Travel Tavern closed for redecoration, Alan is the only guest. Bored out of his brain, he tries to find ways to occupy himself, including buying tungsten-headed screws he has no intention of using, walking along the dual carriageway to buy windscreen washer fluid from a petrol station and dismantling the trouser press in his hotel room.

Michael has a new friend, Tex, who likes all things American. Alan is jealous and cancels Michael’s invitation to join Alan in watching all the James Bond films. Lynn’s new boyfriend, Gordon, warns Alan about his behaviour towards Lynn.

After resigning himself to judging vegetable contests at local fetes, Alan is overjoyed to learn that BBC Chief Commissioning Editor Tony Hayers has died and will be replaced by the more amenable Chris Feathers, who is much more keen on Alan. If Alan can secure a BBC contract, he will finally be able to leave the Linton Travel Tavern, where he has now stayed for 6 months.

With his chat show and his marriage both over, Alan is now living at the 3-star Linton Travel Tavern hotel and DJ-ing for the graveyard slot on Radio Norwich. He is desperate for a second series of his chat show, so desperate that he keeps having visions of himself doing lap-dances for BBC Chief Commissioning Editor Tony Hayers, who is he going to be having lunch with to discuss his future with the corporation.

4. The Colour of Alan

Michael’s front door has been stolen so he is staying over at Alan’s. Alan’s latest gig is hosting an annual awards ceremony for a coal-effect gas fireplace company and is being visited by a representative of South African extraction. After his pranking his country club backfires, Alan is forced to take the rep to his house still under construction, giving Lynn and Michael one hour to set up a conference room from whatever they can find.

Alan meets Dan, who spookily likes various things he does – Lexuses (or rather “Lexi”), Lynx deodorant, The Daily Mail, Director’s Bitter and calling people “saaad”. They become instant friends, and since Dan owns a successful kitchen company, he could provide both a good deal on a kitchen and a chance to climb Norfolk’s social ladder.

2. I Know What Alan Did Last Summer

After telling his Ukrainian girlfriend that he is a good friend of U2’s singer, Bono, she insists on meeting him. Meanwhile, two tax inspectors come to see Alan and he’s rather nervous.

Alan has a new gig presenting videos for Hamilton’s Water Breaks, a local boating holiday firm. However this is being jeopardised by local farmers, who he has incurred the wrath of after making insulting remarks about farming practices on his radio show.