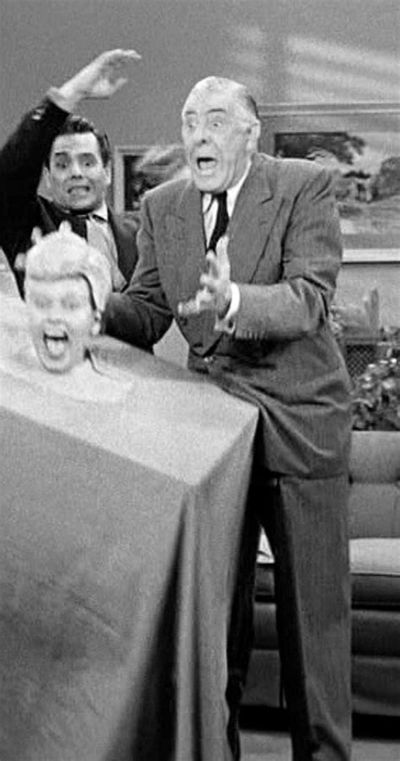 I Love Lucy is a TV series starring Lucille Ball, Desi Arnaz, and Vivian Vance. The wife of a band leader constantly tries to become a star – in spite of her having no talent, and gets herself (along with her best friend) into the…

Lucy and the gang have adventures on the streets of Paris.

The gang meets Harpo Marx and Lucy does the famous ‘mirror’ routine with him.

Lucy attaches herself to Ricky using old handcuffs from Fred. She doesn’t know he never had a key for them.

7. Ricky and Fred Are TV Fans

The girls get fed up with the boys watching the fights on television. They try to do something to distract them and end up getting arrested.

Lucy insists in learning to drive the new car so she can help with the driving on the way to California. After one bad lesson, she tries teaching Ethel how to drive. Ethel ends up wrecking the car before it has insurance.

To avoid bad publicity for the upcoming opening of his Don Juan movie Ricky calls Grauman’s Chinese Theater to explain how John Wayne’s footprints went missing. The manager of Grauman’s promised not to call the police if the footprints were returned by that evening’s opening of John Wayne’s film Blood Alley (1955). Having broken them, that is obviously impossible, so Ricky convinces John Wayne to provide a new set of footprints.

In Miami Beach, Lucy and Ethel make a bet with Ricky and Fred as to who can catch the biggest fish. To ensure winning, the day before the contest, each pair buys a 100 lb. tuna and stores it in ice in the hotel bathtub. Laughter ensues when the guys and the girls switch fish and bathtubs to hide them from one another. They all get caught when they decide to drop the charade and get rid of the fish. The next day they go out on the boat and Lucy’s and Ricky’s lines get tangled and Ricky goes overboard. Lucy hauls him in with her line.

3. Lucy Gets a Paris Gown

Lucy is determined to get a new designer dress while in Paris.

When the Ricardos and the Mertzes arrive in Hollywood, Lucy goes to the Brown Derby restaurant where her sighting of William Holden turns catastrophic.

1. Lucy Does a TV Commercial

Lucy has angled her way onto Ricky’s special as the show’s pitch girl. She advertises a medicine called “Vitameatavegamin.” Believing it contains vitamins, minerals, meat, and vegetables, Lucy does not know is that it also contains twenty-three percent of alcohol.

The Worst TV Thrillers from 2002