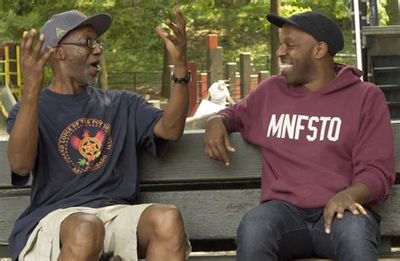 In the early 1990s, a new wave of East Coast artists emerges, led by Nas, Wu-Tang Clan and the Notorious B.I.G.

Alternative hip-hop bubbles up from the streets: Mos Def spits in New York, the Freestyle Fellowship chops it up in LA, and Eminem battles on the circuit.

3. The Underground to the Mainstream

Hip-Hop crews in the Bronx and Harlem begin to form around the DJs, but these pioneering groups never record any music. It would take R&B veterans to see the genre’s commercial potential and create Hip-Hop’s first hit, “Rapper’s Delight.”

A hot, sticky music scene is born in Atlanta, Georgia, as the infectious hooks of TLC and Kris Kross yield to the gritty originality of OutKast and Goodie Mob.

With the rise of N.W.A., gangsta rap and Suge Knight, the East Coast-West Coast rivalry climaxes with a lethal beef ensnaring the great Tupac Shakur and Notorious B.I.G.