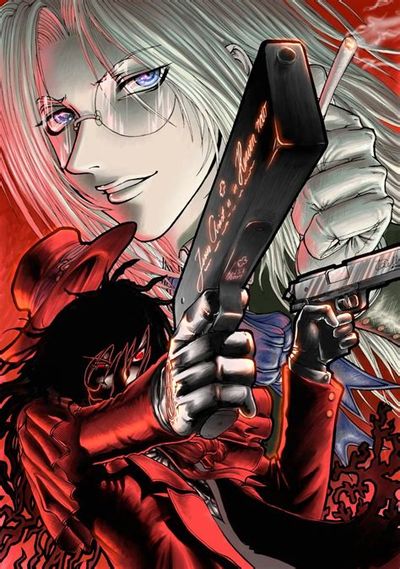 And now an ending. London is in ruins, Enrico’s crusade has failed, captain Bernadotte and Alexander Anderson has fallen and Walter has defected to Millenium. As Alucard duels Walter, Seras and Integra fights through the zeppelin Deus Ec Machina and faces the last remaining soldiers of Millenium. But there also waits the leaders of Millenium: the Major and the mysterious Captain, the man Walter feared to face and who is about to reveal his true nature…

Working on a tip from Iscariot, Alucard, Seras, and a mercenary team hired by Hellsing go to Rio de Janeiro to find and eliminate Millenium. When they arrive, they are confronted by a S.W.A.T. team sent by Tubalcain Alhambra, a member of Millenium.

The Queen of England calls a meeting between Hellsing and Iscariot. As they discuss what to do about the Millennium threat, they are interrupted by a message from the Major, who declares his intention to go to war with England. Also, the Eagle, a British aircraft carrier, is captured by Rip Van Winkle and her Millennium squadron, and Alucard is sent to wipe them out.

The Major sends Zorin and her troops to destroy Hellsing Headquarters. Seras and Pip, Captain of the Wild Geese, fight for Britain and their lives.

The Major and his battalion of 1000 SS-vampires head toward London and start a devastating assault on the city. Integra and Walter race toward Hellsing Manor while Sir Penwood try to set up resistance against the invading vampires.

As the battle commences, back at the Vatican Enrico Maxwell, the head of Section XIII Iscariot is given a major promotion, and with it he begins to mobilize the Vatican’s fighters. Meanwhile, in the heart of London, while Integra is busy convincing the Iscariot members to escort her home, the Hellsing Mansion is under siege by Zorin Blitz and her forces. The only line of defense against this assault are Captain Bernadotte, his Wild Geese, and Seras. As the battle wages on, they must deal with not only the vampire Nazi forces strength, but Zorin’s mysterious powers of …

Enrico and the Vatican forces arrive in London and start to attack the Millenium forces and the few still living civilians. But soon Alucard arrives to to the carnage. Hell will sing.

Alucard, Walter, and Seras defend Sir Integra and the Round Table Conference from an attacking ghoul army led by the Valentine Brothers.

In flashback, Integra is seen assuming leadership of the Hellsing organization as she resolves a conflict with her uncle with the help of the vampire Alucard. In present day, Alucard goes on a mission to the town of Cheddar to silence a vampiric priest who has been killing townspeople, and in the process must also present the young police girl Seras Victoria with the choice to either die or become a vampire. Also, Alucard battles a Vatican priest named Alexander Anderson after they are both sent to kill the same vampire in Northern Ireland.

Alucard faces off with father Anderson. Meanwhile, the Major starts to put his last parts of his plan into motion.

The Best Action Shows from 1996