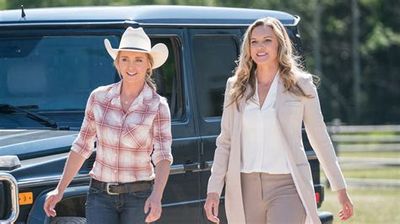 Kit asks Ty to help her re-home a horse that she was given. Amy agrees to help Caleb with team roping but backs out when it means being around Kit and Ty more than she wants. Jack and Tim lock horns about their last competition in the Hudson Derby when Lou resurrects the event as a fund raiser to help Mrs. Bell and others with some county legal problems.

Ty and Scott Cardinal must survive in the wilderness, at the site of their plane crash, and try to make contact with their rescuers. The other residents of Heartland are not willing to sit around waiting so they load up their horses and head to the area where the plane disappeared to help with the search.

Amy and Ty plan a romantic trip to Pike River, but Jack tags along to visit an old friend.

7. Something in the Night

Jack shanghais Tim and takes him to Moosejaw to confront his Ex Girlfriend and son. Meanwhile Amy is left to confront Janice about how to train the new racehorse.

Amy Fleming is preparing for the Fall Finale. Her enemy Ashley Stanton is preparing to win at all costs, but finds that there’s something in her way. After asking every other professional trainer and getting no results she finds that she may need to look to her enemies for help. Secrets are finally revealed and more suspicions arise, leaving us dreading everyday until the season 2 release.

Amy and Ty hold off telling the family their great news when they return from their trip to find everyone reeling from the devastating fire at Lou and Peter’s home. Meanwhile, Jack gets another visit from Clint to learn whether he’s been officially approved, or denied, as Georgie’s legal foster parent. Traumatized by the fire, Phoenix won’t go anywhere near Georgie and Amy must find a way to restore their special bond. And in the aftermath of losing their dream home Lou and Peter make a surprising decision that provides new hope for the future.

When Jack learns Ty is riding his bike solo to a remote lake to spread his father’s ashes he decides to surprise Ty and join him for this meaningful road trip. Amy is hurt by Ty’s decision to make the trip without her and throws herself into helping Bryce, the paralyzed exsoldier we met in season 4, to find a new horse suitable for para-riding. Mallory is totally conflicted when Austin tries to woo his way back into her life. And Soraya has a new boyfriend that could mean big changes in her future.

A friend from Jack’s past shows up at Heartland when one of their old band mates passes away. Lou and Lisa secretly try to gather the other remaining members for a reunion performance to celebrate Jack’s birthday. Meanwhile, Amy works with a horse that won’t stop bucking as Caleb becomes smitten with Kelly – the horse’s sassy and attractive owner. And Mallory meets a young country singer wannabe who seems like her perfect match… except for the fact that he idolizes her dad.

Ty and Amy decide to have a weekend alone in Montana when they find a hitchhiker. Back at the ranch, Lou confronts Peter about the job offer and why he turned it down. Meanwhile, Georgie volunteers at the vet clinic.

Amy is hired to gentle one of the wild horses, but his temperament may prove impossible to work with. Meanwhile, Georgie is dragged to a university open house by Peter and ends up face to face with Wyatt after months apart.