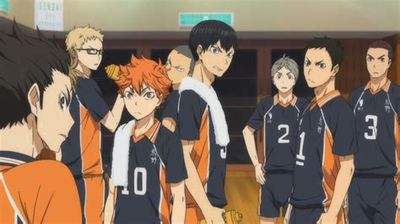 Hinata and Kageyama may have declared war on Ushijima, but, using his own style of blocking, Shiratorizawa’s Tendo poses a more direct threat to the duo.

9. The Point That Changes the Momentum

Karasuno plays the third set against Aoba Johsai, fighting to move on in the spring preliminaries

With Hinata and Kageyama’s clever moves, Karasuno is now in the lead against Dateko. But with Aone blocking, Dateko seems poised to flip the script. Now it’s up to ace Azumane to show his skills, and break through Detoko’s “Iron Wall”.

The match vs Date Tech continues – neither team managing to gain a decisive lead. As the match nears it’s end, Asahi steps up as Karasuno’s Ace. Will he finally gain his revenge?

The Grand Battle between Karasuno and Inarizaki High comes to a close. Who will come out the victor?!

Inarizaki swing the momentum back to their side leaving Karasuno in big trouble. Hinata’s hard work and dedication finally pays off.

4. The Halo Around the Moon

The last part of the 2nd set. Karasuno comes back at Shiratorizawa with Tsukishima and Nishinoya’s total defense. They end up in a heated battle in the end, resulting in multiple deuces… Who will score the final point?

Yamaguchi is given a chance to redeem his former cowardice. Will his new found confidence prove justified?

Tsukishima finally returns to the court ready with strategies in mind. Karasuno is now able to catch up with their strong defense. With both teams running out of time-outs, it’s the moment to decide who will come out on top.

It’s the last set and Karasuno is in the lead. Aoba Josai and Karasuno try their hardest to win, with the thought that the strongest six would be the ones who claim victory. But triumph is with Karasuno, as they win the match with Kageyama and Hinata’s quick spike. Oikawa reflects that it is impossible for someone with no natural talent to beat any volleyball genius, no matter how much they train, strategize or who their teammates are, but he would continue on the path straight ahead of him with everything he’s got.

Best Episodes Of Line of Duty

Best Episodes Of This Is Us