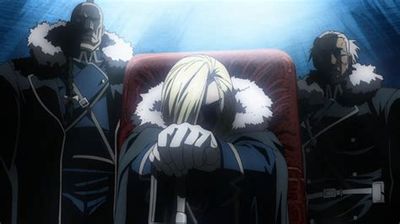 Scar’s mission to destroy those who slaughtered his people is fueled by justifiable rage. Upon learning the role Scar played in her parents’ deaths, Winry claims those murderous feelings as her own.

The Elrics meet Shou Tucker, a leading researcher in the field of chimeras. He has much to teach Ed and Al about alchemy – and the horrible cruelty that sometimes accompanies it.

Truths are exposed when Al finds the one called Father, and Mustang hears the tale of Bradley’s creation – but the most amazing revelation is reserved for Ed after he once again breaks alchemy’s greatest taboo.

A truly epic battle erupts when Edward, Mustang, Hawkeye, Greed, Izumi, and Armstrong attack the god-like Father. The odds are against the forces of good – until one brave boy makes a shocking sacrifice.

In a violent clash with Greed, King Bradley proves to be a brutal opponent. But the man who finally destroys the Ultimate Shield is more powerful than even the Fuhrer himself.

5. Ten no hitomi, shi no tobira

The light is gone. Shadows swallow everything. As the planet quakes and the heavens tremble, the souls of heroes and villains alike vanish into darkness. The circle is complete.

As Envy writhes within the firestorm unleashed by Mustang’s vengeful rage, Hawkeye must take drastic measures to prevent the Flame Alchemist’s hatred from going out of control.

Ed fights the original homunculus known as ‘The father’ trying to defeat him in order to get his and Al’s body back.

As the light of the sun vanishes, Mustang learns the loss which comes from seeing the other side of the Gateway – and five sacrifices gather in the dark presence of the Father.

1. Death of the Undying

Mustang, Alphonse, Havoc, and Hawkeye split up to search a military laboratory. If Lust has her way, none of them will ever see each other again.

Best Episodes Of The Sopranos