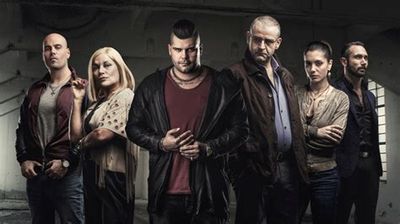 Gomorra: La serie is a TV series starring Salvatore Esposito, Marco D’Amore, and Cristiana Dell’Anna. Ciro disregards tradition in his attempt to become the next boss of his crime syndicate. The internal power struggle puts him and…

Bloodshed is imminent as Conte returns to Naples to avenge Tonino’s murder. As Ciro tries to distract him, Daniele’s life hangs in the balance.

Genny tries to close a deal. Scianel gets out of prison.

Ciro, Genny and Enzo sign the peace with the Confederates, obtaining part of their territories.

Ciro, now in Sofia, has some issues with his new boss’ son.

As the Savastanos’ rivals rally around Conte, Genny also faces trouble internally as his young supporters clash with the older lieutenants. As Imma intervenes, she learns Ciro is behind the murder of Tonino.

Azzurra and Pietrino have come to be in the Confederate’s sights. To save them, Genny is forced to work out a secret plan whose variables are endless.

As Ciro prepares for all-out war with the Savastano clan, Pietro finds a way to deal his enemy a devastating blow.

Genny and his colleague Resta leave for London to acquire the company that will take care of his new project, but he will be obliged to confront the demons of his past.

After Imma’s death, Genny finds a CD with a recording of the conversation between Ciro and Manu. Furious at Ciro’s betrayal, he decides to kill all the older lieutenants in the clan. When Ciro realizes Genny’s plan, he meets Conte to convince him to kill Genny and his boys.