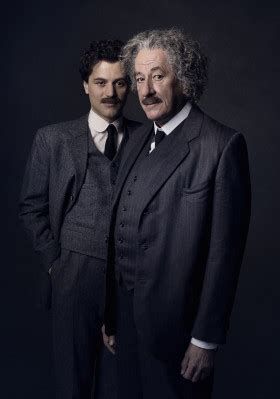 The story of Albert Einstein, seen through glimpses of his twilight years and flashbacks to his time as a student in Munich and Zürich in the 1890s.

Einstein begins to experience the academic life he coveted, but he falters in his familial responsibilities. He is reintroduced to his cousin Elsa.

In the wake of the war, patriotism corrupts one of Albert Einstein’s closest friends, Fritz Haber, pitting them against each other.

Einstein and Mileva juggle raising a family with his attempts to catch the eye of the scientific establishment.

Einstein tries to balance his personal responsibilities and inner calling with the practicalities of finding work.

Einstein moves his family for work, and to be closer to his new love, Elsa. He sets out to prove his theory as his marriage reaches a breaking point.

Einstein and his wife Elsa attempt to flee Germany after the rise of the Nazis, but they face unexpected roadblocks.

In the season finale, Pablo finds companionship with a new woman. In near seclusion, Pablo obsesses over creating the perfect painting. Gilot struggles to escape Picasso’s shadow even after remarrying and moving to the US.

After butting heads in class, Einstein falls in love with the determined Mileva Maric.

Albert Einstein settles into life in America, but dangers abroad continue to be a threat to both him and his former colleagues.

The Best Animation/Cartoon Series from 1999