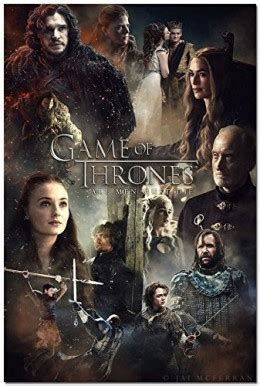 10. Battle of the Bastards

Jon and Sansa face Ramsay Bolton on the fields of Winterfell. Daenerys strikes back at her enemies. Theon and Yara arrive in Meereen.

9. The Mountain and the Viper

8. The Dragon and the Wolf

Everyone meets in King’s Landing to discuss the fate of the realm. In Winterfell, Sansa confronts Arya. Sam reaches Winterfell, where he and Bran discover a shocking secret about Jon Snow.

7. The Dance of Dragons

6. And Now His Watch Is Ended

Jaime mopes over his lost hand. Cersei is growing uncomfortable with the Tyrells. The Night’s Watch is growing impatient with Craster. Daenerys buys the Unsullied.

Robb goes to war against the Lannisters. Jon finds himself struggling on deciding if his place is with Robb or the Night’s Watch. Drogo has fallen ill from a fresh battle wound. Daenerys is desperate to save him.

Sansa and Jon make plans. Arya is given another chance to prove herself. Jorah confesses a secret to Daenerys. Tyrion meets with a red priestess. Yara finds her rule tested. Bran discovers the origin of the White Walkers.

1. The Rains of Castamere

Robb and Catelyn arrive at the Twins for the wedding. Jon is put to the test to see where his loyalties truly lie. Bran’s group decides to split up. Daenerys plans an invasion of Yunkai.

Best Episodes Of The Vietnam War