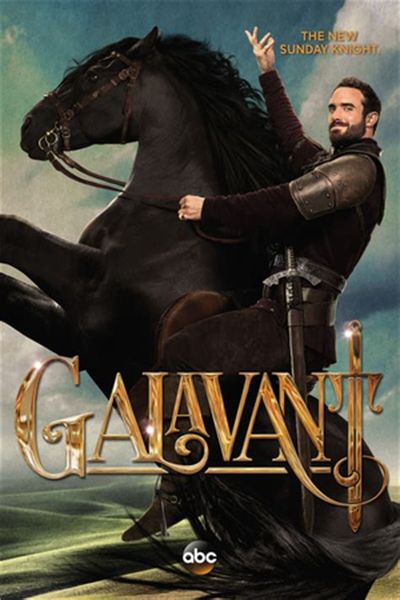 Desperate to raise an army and storm Hortensia, Galavant and King Richard return to his former castle to find the village thriving, now that they’ve found democracy. The discovery causes Richard to have an identity crisis now that his people don’t need him. Galavant uses a town hall meeting to recruit fighters from the village, but volunteers are in short supply. In Hortensia, an evil wedding planner named Wormwood poisons Isabella’s mind with an enchanted tiara, intent on making her help him take over the kingdom.

9. It’s All in the Executions

Galavant enlists King Richard in a plot to kill Kingsley before the duel but ends with a drunken whimper. Will Gareth kill King Richard in the duel? Will Galavant rescue everyone? Will Madalena find a new “boy toy?” The answers are very different from what you expect.

The trio get thrown in the dungeon and King Richard visits Xanax, a magician, while Madalena makes plans of her own.

Galavant is fed up with Richard after he trades the Jewel of Valencia for a “dragon” and travels to find the giants on his own. They are not at all what he expected but are willing to help under one condition – he must help them defeat the dwarves. Gareth tells Sid about his feelings for Madalena. Sid warns Gareth against confessing his feelings, but he is determined, which ultimately leads to a dangerous situation for one of the men. Woodworm sends Isabella to Princess Jubilee’s palace to hand deliver her invitation to her wedding.

Richard, Roberta and Sid rush fatally wounded Galavant to a healer who has a magic potion that could save Galavant’s life. While waiting for Galavant to recover, Roberta and Richard almost share a tender moment. Meanwhile, Madalena shares her true feelings with Gareth.

While continuing their quest to gather an army, King Richard discovers that he has a connection to Roberta, the beautiful warrior who volunteered to help. Galavant plays matchmaker. Madalena is invited to the Basikobitcz party – the popular girls of the kingdom – and can’t wait to be accepted into their group. The party is not what she expected, and, when she returns home, Madalena discovers that she has feelings and does not like her new emotion.

Isabella plots her escape from Hortensia when she receives a call from Galavant via crystal ball. King Richard discovers his castle has disappeared.

3. The One True King (To Unite Them All)

Under Madalena and Wormwood’s spell, the zombie army revolts against Galavant. Meanwhile, Richard goes after Wormwood. Elsewhere, Gareth tries to reason with Madalena, but she is driven to learn how to use her newly acquired dark magic.

As the battle between Hortensia and Valencia begins, Isabella and the Jester are ready to surrender, but when Isabella hears Madalena’s demands, she returns to the Hortensia camp and rallies the troops to fight. Against Gareth’s wishes, a frightened Madalena turns to Wormwood to teach her the evil magic of the “Dark Dark Evil Way,” or D’DEW.

1. A New Season aka Suck It Cancellation Bear

Galavant and the crew are shipwrecked thanks to bad advice, and their overland trek back to Richard’s kingdom leads to a bar in West Hollow-wood then to a fortune teller.

The Best Science Fiction Shows from 2012

Best Episodes Of Phineas and Ferb