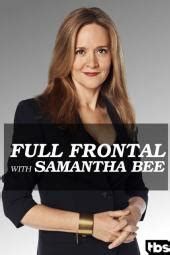 Full Frontal with Samantha Bee is a TV series starring Samantha Bee, Allana Harkin, and Mike Rubens. Comedian Samantha Bee gives her own wry commentary to the contemporary issues of the day.

Full Frontal goes to a Syrian to visit a refugee camp and to examine whether Syrian refugees really pose a serious security risk to the United States. It also discusses the death of Supreme Court Justice Antonin Scalia and looks at the recent Republican and Democratic debates.

Trump Voters. Sam meets with Trump voters and listens to them respectfully while the Full Frontal Fact Checker patiently watches.

Fear and Loathing at Hofstra University: All of Donald Trump’s no hard work finally paid off. Go Ahead, Make Her Day: Hillary had the audacity to come prepared to Monday’s debate. Advice She Didn’t Ask For: Thanks for weighing in, but it looks like Hillary Clinton is doing just fine without the help of body language experts. Debate Watchers: Our contributors visited two debate parties to see who won the debate. We lost. Dancing Near the Stars: In a shocking turn of events, we’d like to congratulate Rick Perry.

Full Frontal is ready to talk about the Deep State; right after we destroy the spy microwave in our kitchen.

5. Not the White House Correspondents’ Dinner

Full Frontal presents the “NOT The White House Correspondents’ Dinner” to celebrate the free press, while there’s still a free press to celebrate.

Full Frontal follows a delegation from the American Atheists on what seems like a doomed mission: to spread their message to the right-wing attendees of CPAC, the Conservative Political Action Conference.

3. Not the White House Correspondents’ Dinner

Full Frontal bids farewell to the Mueller investigation, traces Mick Mulvaney’s ooze-covered path to the White House, and examines the battle that immigrants in the military are fighting… to stay in the military.

In this new documentary film from the makers of Full Frontal, Samantha Bee accidentally discovers America on her way to the conventions.

Samantha Bee goes on the road with the Jeb Bush campaign.

The Worst Science Fiction Shows from 2007