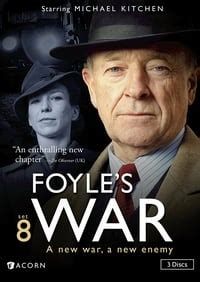 Foyle investigates a mysterious disease affecting local farm animals and looks into the stabbing of a war hero.

When the son of a high-profile Jewish businessman is attacked in the grounds of a university, Foyle wonders whether the attack was racially motivated.

MI5 suspects British atomic research has been infiltrated and asks Foyle to look into whether a Russian spy network could be at work in the heart of London.

7. A Lesson in Murder

Foyle investigates the suicide of a pacifist and death threats to the judge who ruled against his conscientious objector status.

6. They Fought in the Fields

April 1941: Foyle questions three Land Army girls about a murder that occurs on a Hastings farm.

Milner is unhappy with his new DCS and has asked for a transfer, but after the DCS is murdered, Foyle comes out of retirement to replace him.

Foyle joins a municipal committee preparing for the imminent V-E Day celebration but soon finds himself investigating the deaths of two of its members.

The arrest of a young girl on a sabotage charge brings Foyle into contact with a group of English Nazi sympathizers.

Foyle is drawn into the bizarre murder of an ex-Nazi defector and leading expert on Soviet intelligence who had been working for MI5.

Foyle must find out if there was a traitor within the SOE after Hilda Pierce is shot in an attempted assassination.

The Worst Mystery Series from 2004