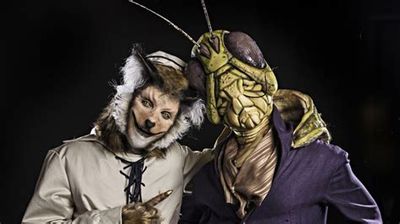 In the season premiere of Face Off, twelve of your favorite artists return to the competition with a twist: this time they’re battling.

The competition tightens as the six remaining artists create original sea monsters in this week’s battles, with the help of an industry expert in next week’s elimination challenge on the line.

The seven remaining artists create never-before-seen creatures that glow in the dark, and are faced with a high-stakes twist.

The six remaining artists are surprised to learn that they will be working with a group of children in a challenge that involves bringing their imaginary friends to life.

5. Battle of the Beasts

The final three must create animalistic kung-fu masters for an actual fight scene.

Twists abound for the final three’s haunted house challenge. Who will be named winner of Face Off Season 12?

Contestants are challenged to create a whimsical character that is worthy of appearing in a Tim Burton film.

The nine remaining artists tackle a challenge that takes them into the worlds of both fashion and horror as they create makeups worthy of horror icon, Clive Barker.

Series judges Ve Neill, Neville Page, and Glenn Hetrick compete against each other for charity with the help of a few Face Off all-stars.

The Worst Laugh Out Loud TV Shows from 2020