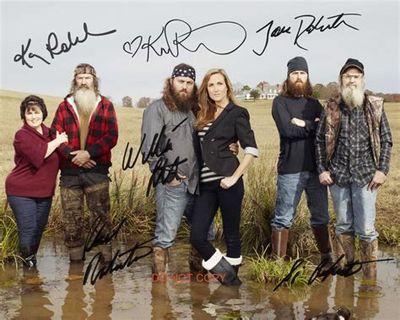 Sadie, has a homecoming dance coming up, but Willie doesn’t approve of her dress selection. Willie decides to take Sadie out to find her a new “appropriate” dress. Jase is in a bit of a predicament when the coffee machine at Duck Commander breaks.

After blowing up one of Phil’s dangerously antiquated duck blinds, the Robertson boys hatch a wild plan to build a luxury duck blind in the sky. Meanwhile, Miss Kay and the Robertson women hold a yard sale and sell some of the boys’ most prized possessions, which the boys don’t exactly appreciate when they find out.

Gearing up for his high school reunion, Willie realizes that he could stand to lose a few pounds. Jase and Korie set out to help him drop some weight and the strenuous battle of man-versus-waistline begins.

After a big order comes in Willie pushes the Duck Commander team to meet the tight deadline, so Jase and the warehouse guys come up with a plan to build a conveyer belt. Elsewhere, Phil and Si declare war on the beavers whose dams are disrupting the water supply.

With Korie still in Africa, Willie and Jep must step in and supervise Bella’s sleepover. When a couple boys play a prank on the girls, Willie and Jep prove to be the perfect chaperones for the task. Meanwhile, Jase takes Si, Martin and Godwin for a round of night golf.

Phil decides to teach his grandkids the value of a hard day’s work by building a football field and culminating in a family football game. But Robertson vs. Robertson competition is further sparked between brothers when Willie and Jase make a side bet that Jase can’t handle the responsibility of being CEO of a day.

Brotherly competition gets the best of Willie when he ditches his kids’ career day to go play golf with Jase. Stepping in for Willie, Phil and Si show up at the school and become the teachers’ worst nightmare. Later that night, Jase returns to the golf course to hunt the prized bullfrogs he’d seen earlier. Unfortunately for him, country club security is also there.

Willie calls the team into work on a Saturday afternoon for an HR training session, but the seminar quickly dissolves from unproductive to complete disaster.

When a heat wave envelops West Monroe the air conditioning unit at the Duck Commander warehouse goes down, turning the duck call assembly room into a boiling sweatshop.

Everyone comes together to plan a surprise wedding for Phil and Kay, setting up a special ceremony on their land, which the whole family attends. Si distracts Phil and Kay by taking them on a “trip down memory lane”.

The Worst Animation/Cartoon Series from 2014