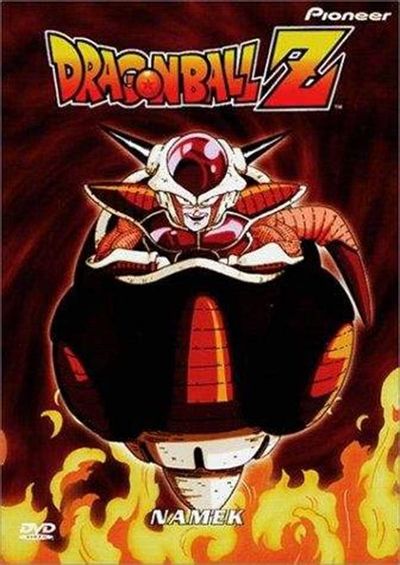 Having reached a higher power level through his anger, Gohan single-handedly takes on the Cell Juniors.

Goku attempts to talk Vegeta into breaking Babidi’s control over him while Babidi tries to convince Vegeta to kill the Supreme Kai.

Goku, Krillin, Piccolo, and Gohan celebrate the defeat of Frieza, but they may be celebrating too soon. Meanwhile, Yamcha, Tien, and Chiaotzu continue fighting the Ginyu Force.

Start of the “Great Saiyaman Saga”. After King Kai explains to Goku that there are actually four Kais and one Grand Kai, they go to visit the Grand Kai’s planet. There, Kai has words with West Kai, Goku meets a fighter named Pikkon, and Goku and Pikkon go to hell to stop Cell and Frieza, who are running amok.

The battle with Nappa continues as Pikkoro and Kuririn try to ambush him while he fights Tenshinhan. Also, Kami-Sama senses that the end of his life is approaching, and Son Goku continues on Hebi no michi.

Goku tells King Kai and Yamcha about what has been happening on Namek, but when King Kai learns that Frieza is there, he warns Goku to stay away. Piccolo, Yamcha, Tien, and Chiaotzu must make King Kai laugh before he will train them. Krillin and Dende hide from Vegeta, who has sensed them; Vegeta fights Zarbon.

As Son Goku trains on his ship, Son Gohan and Kuririn watch as Freeza and his henchmen Zarbon and Dodoria, interrogate a group of Namekkuseijin about the Dragon Ball, and another group of Namekku Senshi show up to stand against them.

Son Goku and Piccolo fight Raditz. While Son Goku fends Raditz off, Piccolo attempts to gather enough energy to use his newest attack.

Goku fights against his virus as Android No. 19 beats him up, and Vegeta steps in to save him. Meanwhile, Yajirobe plays with baby Trunks, and he drives Bulma to see the battle.

After being saved by the intervention of Trunks and Goten, Vegeta decides to put an end to Majin Buu, even if it costs him his life. Also, Piccolo fights with Babidi.