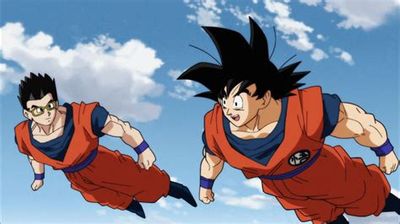 After hurting Android 17 and Frieza with his Hakai, Toppo starts attacking Vegeta. Vegeta was unable to match Toppo’s new God of destruction form but he raged himself against Toppo. In end to knock out toppo, Vegeta detonates himself.

Toppo reaches overwhelming powers in order to make sure Universe 11 wins and he will be named new God of Destruction.

7. A Miraculous Conclusion! Farewell, Goku! Until We Meet Again!

The Tournament of Power reaches its final climactic moment, as Goku, Frieza and 17 have to eliminate Jiren for the survival of Universe 7.

After Goku’s attack shakes Zamazu’s balance and reveal a weakness in him, he and Vegeta fuse together as they see hope to prevail. Nevertheless, It’s Trunks’s world and to him it all ultimately comes down.. .

Goku and Vegeta appear in the future to fight Goku Black, but they find that he has developed a new power.

A super heated battle for survival continues. With Jiren puttin Goku on the ropes even after he awakens ultra instict Goku surrpasses his limits once again by mastering the ultra instict.

The battle between Goku and Hit continues, however, Hit proves to be more formidable than anticipated.

2. The Signs of a Comeback! Ultra Instinct’s Huge Explosion!!

To counter Goku’s increase in power, Kefla powers up to Super Saiyan 2 and the two of them face off while Goku continues his efforts to master Ultra Instinct.

The climactic battle to decide the fate of Universe 7 continues as Goku, now mastering Ultra Instinct, fights Jiren at his full power.

The Best Romantic Series ever