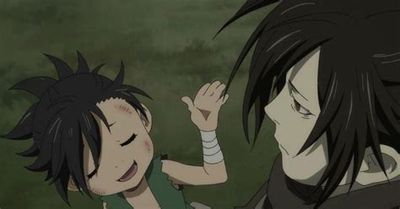 Dororo is a TV series starring Rio Suzuki, Mugihito, and Hiroki Suzuki. A father in pursuit of power gives parts of his new-born son to a host of demons. Years later, the son battles those demons to regain what is rightfully his.

After entering Lord Diago’s domain, Dororo and Hyakkimaru hear tales of Banmon, the huge wall that is the last remnant of a fort that once stood on the border. Hyakkimaru squares off against the fox demon that haunts the wall.

Struggling to adapt to an unfamiliar world of “sound”, Hyakkimaru is injured in a fight with a ghoul. He is taken in and nursed by a girl named Mio, who looks after children orphaned by war. However, after becoming aware of a demon nearby, Hyakkimaru heads out to fight it before he is fully recovered.

8. The story of breaking the cycle of suffering

Asakura forces prepares to attack Daigo’s land. Meantime, to obtain his organs, Hyakkumaru determinedly makes his way to there. Tahomaru wants to stop and defeat his brother and their paths cross again.

7. The story of the cape of no mercy

The shark demon lets out a roar and attacks Dororo, who is tied up and unable to move. Meanwhile, a troop of soldiers commanded by Tahomaru is also approaching the cape.

Daigo’s castle is engulfed in flames. Within, two brothers by blood are at the mercy of fate. Dororo, Jukai and Lady Nui also head for the castle, each with their own thoughts weighing down upon their hearts. For a life that began with a silenced cry, where will the path of destiny lead?

5. The Story of the mercilessness

After getting his sense of smell back, Hyakkimaru starts experimenting on different things, during that time dororo fell ill and we get to know about the past life of dororo and a happy ending.

Nui, the mother of Hayakkimaru and Tahomaru, leaves the castle with Dororo to find and help her sons. Along the way, she sees the way the common people live and comes to a greater understanding of her position in the world.

Hyakkimaru has regained his voice from the devil god, but one leg was stolen from him. After returning to the deserted temple and having his wounds taken care of, he again goes into battle with the demon. Meanwhile, in the abandoned temple where Mio and the children are waiting .

2. The story of questions and answers

Jukai is reunited with a bloodied Hyakkimaru at the site of a recent battle, and finds out the truth of how Hyakkimaru and the demons are connected. Hyakkimaru asks Jukai for a new prosthetic leg, but…

Kagemitsu, who offered up his own son to the demons. Hyakkimaru, who is trying to get back the body parts that were taken from him. As if drawn together by fate, they face each other.

Best Episodes Of Inside No. 9

The Best Laugh Out Loud TV Shows from 1996