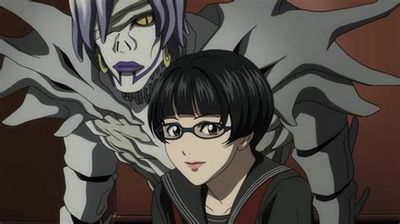 Light, entirely aware of L’s surveillance equipment in his home, begins a very careful game to throw off suspicion.

Near, along with the SPK, meets Light and the task force at a warehouse for the final showdown. To everyone’s shock, Near reveals that Kira’s follower, Mikami, is at the warehouse and is writing everyone’s name in the Death Note.

As the Kira investigation team discusses the disappearance of Naomi Misora, Sakura TV broadcasts an audio tape allegedly from Kira. To prevent Kira from gaining public support, L demands that the broadcast be stopped.

L’s suspicions are momentarily subdued, but he does not discard the possibility that Light may be Kira and decides to meet him in person. At the college entrance exams, Light notices a mysterious and eccentric student staring at him.

L continues to expand his investigations and suspects the police force while Light starts to use another trait of the book to prove wrong the theories of L. In the meantime, Ryuk offers Light a deal.

Light (known to the world as Kira) tests the Death Note to understand the scope of its powers by killing off six convicts in various ways and confirms he can control his victims’ actions before they die.

Light uses the Death Note to try to get rid of the woman who could get him captured and is shocked when it doesn’t work.

Light, his memory recovered, orders Misa to begin killing after Higuchi dies. The Shinigami Rem realizes that everything is going according to Light’s plan, and that L will arrest Misa as Kira unless Rem acts quickly.

L and Light, watching from the investigation team building, wonder whom Higuchi (seemingly alone) is talking to. L wonders if it’s a shinigami. With Rem beside him, Higuchi – frantic to kill Matsuda – takes “the deal” to become unstoppable.

While the world’s criminals continue to drop dead, L meets by computer with representatives from various nations. He requests that a task force be set up in Japan.