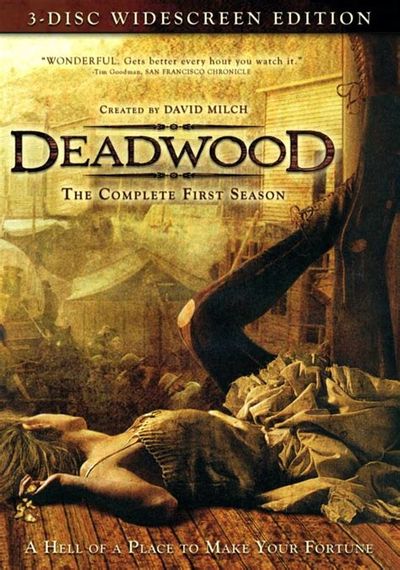 Death in the camp spooks the superstitious, and the impending funeral causes much sorrow. Cy is convinced that Andy – who will officiate at the service – is back in town to run a game. Wu asks Swearengen to back him against the “San Francisco cocksucker”. Bullock encourages his wife to stay in Deadwood.

Bullock makes a connection with his son. Swearengen, who has entrusted E.B. to spy on the new telegraph operator, stokes rumors of an annexation of the camp and amends his agreement with Miss Isgringhausen. Cy aims to unburden a troubled man of his bloodstained money. Alma and Martha come to an agreement, and a tragic accident befalls the camp.

Tensions flare as the camp faces an uncertain future. Al Swearengen taunts Seth Bullock over his relationship with Alma Garret, and the resulting confrontation between sheriff and criminal turns violent. With a new business venture on the horizon, Joanie Stubbs and Cy Tolliver await the arrival of some fancy new whores on the next stagecoach, which also bears two important reminders of Bullock’s past.

Swearengen is spurred to action when a prominent camp member is attacked, Langrishe makes arrangements for his theater, and Jane has an epiphany.

6. Jewel’s Boot Is Made for Walking

Alma’s father, Otis Russell, arrives from New York to “help” with her claim. Swearengen strikes a bargain with Adams to rid him of some legal baggage involving the arriving magistrate. Jewel journeys to Doc’s cabin for help with her leg. Eddie resumes work at the Bella Union, while Bullock is angered by the choice of the corrupt Con Stapleton as the new sheriff.

Another attack is made at Hearst’s behest, Harry and Bullock travel to Sturgis for campaigning, and there’s unrest in Langrishe’s troupe.

Swearengen directs Farnum to buy back the Garret claim. Garret’s wife, Alma, prevails on Calamity Jane and Wild Bill for help with the claim issue. Hickok’s respect for Bullock grows and, as a result, he commissions Bullock to do a review of the Garret claim. An ailing colleague, Andy Cramed, rejoins the Bella Union, and Wild Bill’s run of luck at poker ends abruptly.

General Crook rolls into Deadwood with his troops, known as “Custer’s avengers,” and the Yankton magistrate, Clagett, prompting a parade and business solicitations from E.B. Farnum and Cy Tolliver. Al Swearengen delivers a tortured soul from suffering, and Bullock reacts decisively to Russell’s intentions regarding Alma. Stapleton’s new commission as sheriff proves short-lived, and Bullock and Alma have a late-night meeting.

Tolliver looks for a representative, the Captain calls Dan out, Swearengen continues to be perplexed by Hearst’s moves, and Alma and Ellsworth’s relationship takes a turn.

A marriage occurs against a backdrop of murder and negotiations for elections and the camp.

Best Episodes Of This Is Us