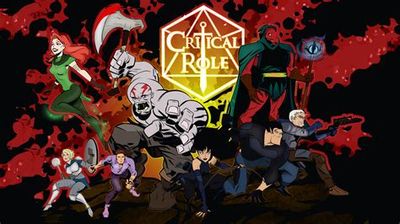 Critical Role is a TV series starring Liam O’Brien, Matthew Mercer, and Taliesin Jaffe. A live weekly show, where a band of professional voice actors improvise, role-play and roll their way through an epic Dungeons & Dragons…

After giving Watchmaster Bryce their new group name of The Mighty Nein, the party set off for Zadash. Following a small altercation with a group of bandits, they finally arrive at their destination and begin to explore the city along with an odd tour guide.

Vox Machina reach an uneasy truce with former enemies. They use this moment to look for Pike’s great-grandfather Wilhand. Tasked with finding an artifact for Quall, they go to his former workshop. Plans are made to make a plan, at dawn.

Vox Machina follow Scanlan and Lionel to the second ziggurat, but are shocked to find one of their long-defeated enemies still lives.

In their 50th episode, Vox Machina creates a plan to infiltrate Westruun to retrieve the Vestige within and Grog learns the true strength of Craven Edge.

Vox Machina travel to Fort Daxio and help the remaining soldiers to prepare for Thordak’s attack. Once complete, and with time to spare as they wait for reinforcements, they continue on to the fire plane to search for the final Vestige.

A new adventure begins! Seven strangers are thrust together to defeat an undead attack during a circus show.

Vox Machina make their way through the cursed caverns of the undead dwarven city of Thomara, hoping their presence won’t be discovered.

Fearing retribution from the Chroma Conclave for killing Umbrasyl, Vox Machina helps the surviving villagers of Westruun to build an underground bunker.

The final battle against Vecna has come. Vox Machina with the help of allies must face against the newly made god.

Best Episodes Of The Shield