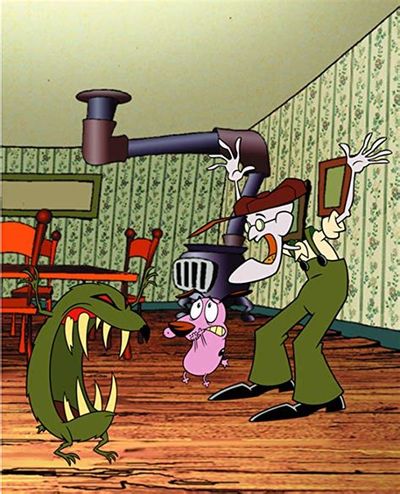 “Fishy Business” The Family is judged to be uncivilized by a tribunal of fishionaries, and are sent off to be re-educated as water-dwellers. They are forced to learn to breathe underwater, swim around and eat fish food. Courage has to find a way to get them back to their life on land. “Angry Nasty People” Tarantella returns, desperate for a hit TV series. He offers the Family roles in his new show “Angry Nasty People.” All they have to do is act mean. They agree, and the Farmer shines as his nastiness is encouraged. Later, Tarantella explains this is a “special” …

9. Queen of the Black Puddle/Everyone Wants to Direct

“The Queen of the Black Puddle” After a rainstorm, a puddle queen materializes at the farm. She woos the Farmer and drags him down into her puddle world. Muriel is heartbroken, so Courage must save the Farmer.

8. Last of the Starmakers/Son of the Chicken from Outer Space

“Last of the Starmakers” Out in space, two beings — a husband and his pregnant wife — scatter stars in the blackness. They are star makers, and are the last beings of their kind. Suddenly a predator attacks them. The husband tells his wife to save herself, go to Earth to give birth. His wife escapes, landing beside the Farmhouse, where she digs a hole deep in the ground and lays her eggs. Muriel and Courage discover her. Muriel instantly bonds with the being, and becomes her nursemaid. The Farmer secretly sells her to a science lab, and the scientists come for her. …

7. The Demon in the Mattress/Freaky Fred

“The Demon in the Mattress” Muriel needs a new mattress. The one she orders comes with a bonus: a demon, which takes over her body. Courage must find a way to get rid of the demon and the new mattress.

6. The Curse of Shirley/Courage in the Big, Stinkin’ City

“Curse of Shirley” Shirley returns to the Farmhouse in the guise of a beggar. Muriel and Courage each give her something, but the Farmer slams the door in her face. She puts a curse on him that can only be undone if he learns to give of himself.

5. The Hunchback of Nowhere/The Gods Must Be Goosey

“The Hunchback of Nowhere” A hunchback knocks at the farmhouse door on a rainy night. The Farmer turns him away, but Courage discovers Hunchy in the hayloft. Much to the Farmer’s disgust, Courage befriends the hunchback.

“King Ramses’ Curse” An ancient artifact is stolen from an Egyptian tomb; Courage discovers it buried outside the house. Unfortunately it carries a curse with it, and the Farmer refuses to return it, believing he can claim a fortune for it. The curse descends. “The Clutching Foot” Fungal gangsters consume Eustace’s body (starting with his foot) and take Muriel hostage which forces Courage to carry out their footwork.

“The Mask: Part 1” Kitty, a dog-hating stranger wearing a mask, arrives at the Farmhouse. Muriel invites her in as their guest, much to Courage’s distress. Kitty tells the family her story, that she’s been forced to run away to save herself from being killed by Mad Dog, an evil and vicious gangster who was jealous of her closeness with his girlfriend, Bunny. As a result, Kitty hates all dogs and beats Courage whenever she can. Courage goes in search of her friend Bunny, hoping to find a way to get Kitty to leave. “The Mask: Part 2” Kitty, a dog-hating stranger wearing…

“Dome of Doom” The Farmer reads in the newspaper that “Mega-Veg Farmaceuticals” is paying big bucks for volunteers to live in a geodesic dome to test their new farm products, and he signs up. Soon Muriel and Courage are planting chemically-enhanced super seeds under an Astrodome-sized enclosure that covers the Farmhouse. But the seeds sprout into a garden of angry predatory vegetables and begin attacking. Courage must find a way to get rid of the deadly plants before he and the family turn into plant food. “The Snowman’s Revenge” The Snowman must find a new home, and …

Strange cannonballs fly from a huge walking tower of mad and miserable Dr. Zalost and rain down on the people of Nowhere, turning them gray and depressed.

The Worst Horror TV Programmes from 2011

Best Episodes Of Are You Afraid of the Dark?