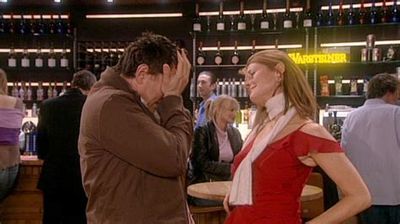 10. The Cupboard of Patrick’s Love

Patrick’s video collection, including the tape of Susan, is discovered. Before she can ask for Patrick’s discretion, he’s already shown it to Steve, Jeff and Sally who haven’t even noticed that Patrick taped over her.

Jane’s aunt dies, and everyone’s going to the funeral … but whose date is whose? The event has Sally worrying that her anti-aging beauty regime may never be enough. This episode also features Jeff’s infamous (and illustrated) theory of the “giggle loop.”

The girls make a shocking discovery.

Jeff’s date with Wilma is coached by helpful cues from the friends by phone, but he still make up absurd lies.

Sally’s dream causes her to wonder about Patrick’s role in her life. After recounting the night they met, Patrick and Sally face an uncomfortable truth.

5. The Man with Two Legs

Jeff is smitten with a woman he’s seen on the train. Well, actually, just with her leg as that’s all he’s seen of her.

4. The Girl with Two Breasts

Jeff meets and tries to “chat up” an Israeli girl who doesn’t speak English. Meanwhile, Steve and Patrick are inspired to thoughts of a science fiction movie featuring intelligent breasts — but what will they call it?

Jeff meets co-worker Julia and is interesting in going out with her as she is with him. Jeff explains his ineptitude to Steve and Patrick at asking women out. Elsewhere, Julia explains her ineptitude at being asked out to Susan, Jane, and Sally. Neither the guys nor the girls are aware of who the love interest is.

Now Steve and Susan have broken up, he has nightmares, willing to give up a lot and beg to get her back. The boys try to comfort him and contemplate weird paths of thought about phoning, sex and lust. Susan won’t even admit it to herself but she is just as miserable. Sally nearly convinced Susan to call him, but that doesn’t work out. Steve got Jeff to call in his place to see if Susan called him, but the idiot doesn’t use his cellphone. In times of despair, each group turns to its temple: the boys to a strip-club, where Jeff remembers pole-dancer Jenny Turbot as a …

While tidying up Steve’s flat, Susan finds a hot tape we’ll just call “Inferno” … but that’s not the FULL title. At a dinner party featuring all the friends, plus Jane’s ambiguous guest, he is called upon to give a detailed review of the film and, by extension, a defense of the whole male heterosexual psyche. Jane also takes this evening as her opportunity to proclaim her variety of “open” vegetarianism.